Updated Info:Renowned Kenyan Scholar and Economist Dr Mwangi Kimenyi Dies in the US 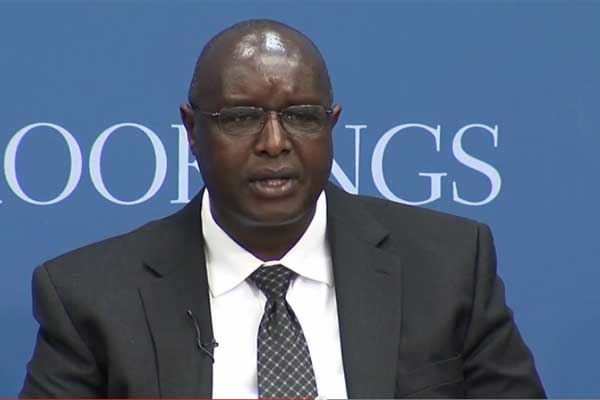 Dr Mwangi Kimenyi speaks at a forum at the Brookings Institution in Washington, DC

We would like to announce the death of Prof Mwangi Kimenyi who went to be with Lord on Saturday,June 6th 2015. Prayers are being held Daily at 6Pm Venue: 930 Skyline Drive Dracut.Massachusetts Apt 24.

Renowned Kenyan scholar and economist Mwangi Samson Kimenyi has died in Maryland in the United States.

Family sources told the Nation that Dr Kimenyi died on Saturday at Johns Hopkins Hospital in Baltimore, Maryland, after a long illness.

Dr. Kimenyi was a former director and senior research fellow at the Africa Growth Initiative at the Brookings Institution in Washington, DC, and professor of economics at the University of Connecticut.

He was also the founding executive director of the Kenya Institute for Public Policy and Research Analysis in Kenya from 1999 to 2005.

Soon after news of his death broke, friends and well-wishers began streaming into his Silver Spring home to condole with the family.

Kenya’s former ambassador to the US, Mr Elkanah Odembo, was among the first people to send condolences to the family.

“The professor was a true ambassador for Kenya and I was very happy to see the kind of respect his colleagues had for him in and around Washington. My thoughts and prayers are with the family,” Mr Odembo said in a statement Monday.

“This is a blow to the Kenyan intellectual fraternity,” said Mr Kimani Karangu, a close family friend who was also Kimenyi’s college mate.

Previously, Dr Kimenyi was a professor at Mississippi University, a visiting professor at the University of Wisconsin and a fellow at the Hoover Institution.

He also served as member of the board of directors of Equity Bank.

At the time of his death, he was a member of the Advisory Board of the School of Economics at the University of Nairobi.

Dr Kimenyi received his undergraduate degree from the University of Nairobi and completed graduate studies at Ohio University and George Mason University, where he earned a doctorate in economics in 1986.

He completed certificate programmes at the University of Michigan and at Harvard University.

He had authored and co-edited eight books and six policy monographs as well as publishing widely in refereed journals. His work mainly focused on institutional policy reforms and Africa’s economic development.

Dr. Kimenyi received many awards and honours, including as co-winner of the Outstanding Research Award (2001) by the Global Development Network and winner of the Georgescu-Roegen Prize in Economics (1991).

He was recognized by the Senate and House of the state of Mississippi for his work on public transit.

In 1994, Dr. Kimenyi was named by Policy Review, a prestigious US publication, among the top 10 young market economists in the United States.

In November last year, he received the Innovative Scholarship Award at the sixth Global Peace Convention in Asuncion, Paraguay.

Born in the then Murang’a District in 1956, Kimenyi received a Bachelor of Education degree before proceeding to Ohio University in the United States for a master’s degree in economics and international affairs and to George Mason University in Virginia for his PhD.

He has taught economics for several years and has worked for the World Bank, the United Nations and African Development Bank.

Updated Info:Renowned Kenyan Scholar and Economist Dr Mwangi Kimenyi Dies in the US Reviewed by samrack on June 8, 2015 .

Share thisFacebookTwitterPinterestEmailWhatsAppDr Mwangi Kimenyi speaks at a forum at the Brookings Institution in Washington, DC Renowned Kenyan Scholar and Economist Dr Mwangi Kimenyi Dies in the US We would like to announce the death of Prof Mwangi Kimenyi who went to be with Lord on Saturday,June 6th 2015. Prayers are being held Daily at 6Pm