Raila breathes fire as he defends the Kenyatta and Odinga families 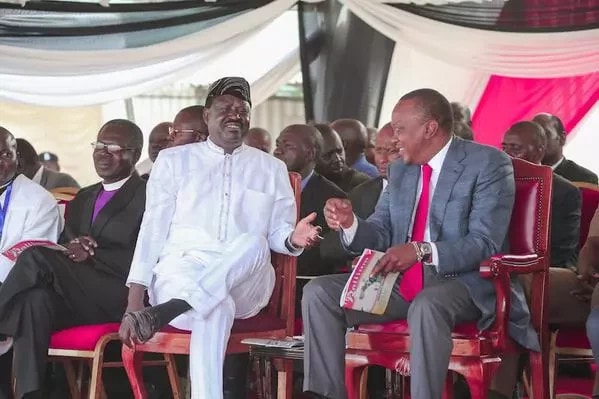 Raila breathes fire as he defends the Kenyatta and Odinga families

Raila Odinga did not take it kindly when he was asked to explain why the Kenyatta and Odinga families held Kenya hostage politically – In a rare show, Raila went out on a limb and defended the two families, including President Uhuru Kenyatta -He maintained that the two families were in those positions because of their sacrifices and not by entitlement In a rare show of brotherhood between a member of the opposition and one in the ruling government, National Super Alliance presidential candidate breathed fire as he went out on a limb to defend the Kenyatta and Odinga families. During the presidential debate held on Monda, July 24, at the Catholic University of East frica, one of the modertators, NTV’s Linus Kaikiai, asked Raila how he felt about being a member of one of two politically royal families in Kenya.

You come from one of two families that have dominated Kenyan politics for over 50 years and held Kenyan politics hostage. There are two characteristics at play here. One family moves with a sense of entitlement in terms of leadership (Kenyatta family) and another with a sense of victim hood (Odinga family). What do you say to those perceptions?” asked Kaikai.

“Those are very misconceived perceptions. First, begin at the beginning. Jomo Kenyatta was initially a freedom fighter and was imprisoned by the colonialists for 9 years and kept under very inhumane conditions, “Jaramogi Oginga became a freedom fighter and fought for the release of Kenyatta. After he was released. Kenyatta became the president and Jaramogi the vice president. They earned those positions by virtue that they sacrificed for the freedom of this country. It was not entitlement. The Kenyan people elected them to those positions 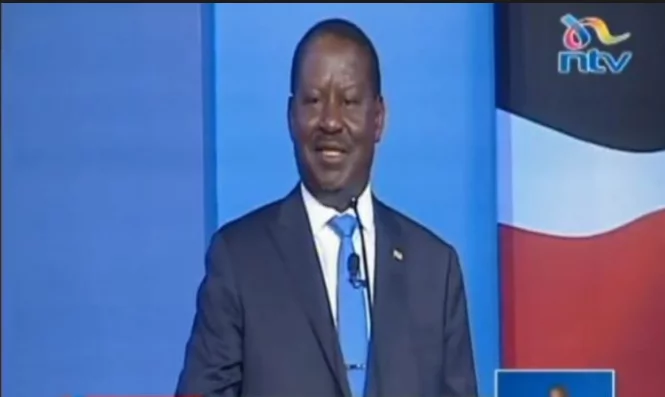 Raila Odinga at the Presidential Debate. The debate was aired across several major television and radio stations in the country. Photo: NTV.

“They disagreed during implementations of policies at that time and Jaramogi resigned then went into the opposition. The rest is history. Jaramogi became the leader of the opposition until his death. On my side, I was involved in what is called the second liberation. Not by invitation by my father but by m conviction. I was not in politics because my father introduced me to politics. I came here alone to do what I believe is right for this country, “I represent the force for change in this country. Uhuru Kenyatta on the other hand was introduced to politics by former president Daniel Moi who picked him as his preferred heir. Uhuru came in by invitation from his mentor as a boy and has now remained on his own, an actor as Moi exited. He did not come to the stage at the invitation of his father.

He’s a Kenyan like any other Kenyan. It is very unfair to infer that we have held this country hostage as families,” responded Raila. Raila Odinga was set to debate President Uhuru in the debate but the Jubilee leader was a no-show, giving Raila 90 minutes of uninterrupted time to lay out his agenda, answer questions as well as defend his past moves while a parliamentarian and a former premier.

Raila breathes fire as he defends the Kenyatta and Odinga families Reviewed by samrack on July 25, 2017 .