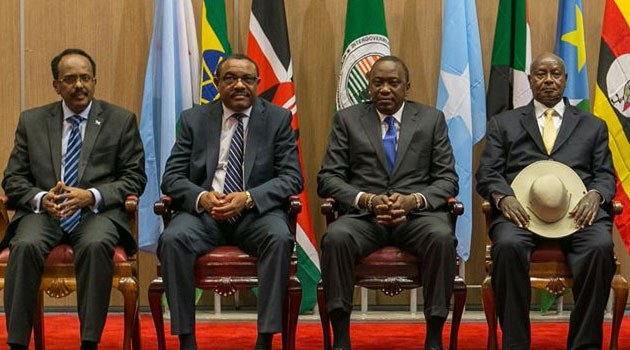 President Kenyatta and some of the IGAD leaders who will attend the London Conference on Somalia. Photo/FILE.

President Uhuru Kenyatta is on Thursday this week scheduled to attend the London Conference on Somalia before heading to China for the Belt and Road Forum.

The London conference will bring together Heads of State and governments from across East Africa and other key partners, along with senior figures from international organizations.

“Previous conferences of a similar nature were held in 2012 and 2013. The 2012 London Conference focused on the underlying causes of instability, as well as the symptoms including famine, refugees, piracy, and terrorism,” he said during his weekly briefing.

From the UK, the President will head to Beijing for the Belt and Road forum to be held on Monday next week, bringing together at least 28 heads of states and governments, as well as UN Secretary General António Guterres, World Bank President Jim Yong Kim and IMF boss Christine Lagarde.

The theme of the forum is “Strengthening International Cooperation and Co-building the ‘Belt and Road’ for Win-win Development”.
The ‘Belt and Road’ initiative is a development strategy and framework, proposed by Chinese President, that underlines China’s push to take a bigger role in global affairs, and its need for priority capacity cooperation in areas such as steel manufacturing.

Apart from the summit President Kenyatta will hold bilateral talks with China President Xi Jinping with main focus on cooperation on infrastructure development.

President Kenyatta to attend London Conference on Somalia Thursday Reviewed by samrack on May 7, 2017 .