President Kenyatta goes for Kibaki’s key advisers ahead of polls 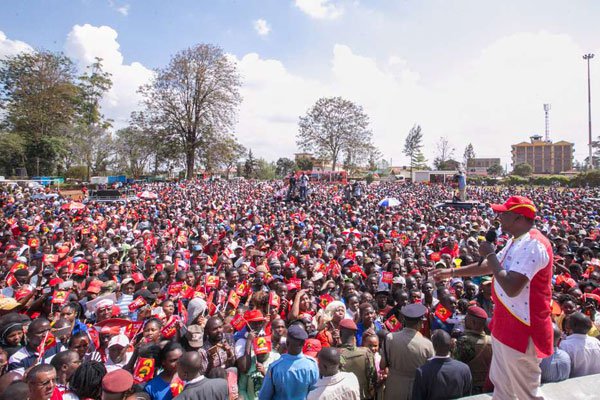 President Kenyatta goes for Kibaki’s key advisers ahead of polls

President Uhuru Kenyatta has embarked on a series of changes that have seen some influential individuals who worked for his predecessor Mwai Kibaki playing a bigger role as his advisers.

The need for more experienced hands, according to insiders, is informed by a set of what some in the president’s camp see as political miscalculations that have seen the opposition running rings around the Jubilee administration.

Some of the new names that are now enjoying the President’s ear include former Nakuru Governor Kinuthia Mbugua and Nyandarua Governor Francis Kimemia.

Among those whose influence could diminish following the ongoing changes are the President’s private secretary and nephew Jomo Gecaga  and Solicitor-General Njee Muturi. They will, however, retain their positions.

Mr Mbugua served as Administration Police Commander from 2003 to 2012 where his record earned him admiration and respect among officers for modernising and boosting the image of the unit. He was a powerful figure in the Kibaki administration before going into politics.

Mr Mbugua has already taken up his job at State House where sources indicate he is performing the duties of private secretary in charge of administration. This means he handles the president’s diary on state, official and political matters.

“Mr Mbugua is a senior aide to the President based at State House,” he said.

Manoah further clarified: “The President has not sacked anyone to bring the former governor on board.”

The position of private secretary since 2013 has hitherto been the preserve of Mr Gecaga whose duties seem to have been eclipsed by the entry of Mr Mbugua, who was promised a job after being asked to shelve his ambitions to run as an independent candidate following his defeat in the Nakuru Jubilee nominations for Governor to Lee Kinyanjui.

Sources say the soft-spoken  Mbugua, since taking up the new role, has organised several visits to State House by various interested groups.

If President Kenyatta is re-elected on October 26, Mr Mbugua will play a key role not only in national succession politics but also in the Mt Kenya region.

Some believe he is the right man for the job having risen through the bureaucratic structure by starting as a District Officer to the hallowed corridors of Harambee House as Commandant Administration police and also having tasted the rough and tumble of politics as a governor.

“The President has had a soft spot for Mbugua. It also removes persistent grumbling of Kikuyus in the diaspora (those in Rift Valley) that when it comes to sharing the cake their relatives in Central Kenya take the whole share,” said a highly placed source.

With the expected retirement of head of Public Service  Joseph Kinyua, Mr Mbugua’s role may get bigger in the fullness of time.

One of the missing links in President Kenyatta’s camp was a respected political hand who could foresee any political  trap set up by the opposition and act on it.

Some of the examples cited by his handlers that could have been averted had there been a senior official at State House was the insistence that the Isaac Hassan led IEBC  had to be fired. Jubilee was also caught flatfooted when Nasa decided to move to the Supreme Court on the last day of filing  the presidential petition.

Sources also indicated that the President has also been in close touch with once powerful Head of Civil Service and Nyandarua Governor Francis Kimemia.

Mr Kimemia was part of a much feared group of officials in President Kibaki’s kitchen Cabinet that never got along with Mr Kenyatta’s backers in the succession politics of 2013.

At one time, Mr Kenyatta said unnamed people he referred to as “mashetani” in December 2012 had been instrumental in prevailing upon him not to run for the presidency and instead back Musalia Mudavadi.

After he came to power, President Kenyatta appointed Mr Kimemia Secretary to the Cabinet. In 2015 Mr Kimemia alongside six Cabinet Secretaries left government after their names were tabled in Parliament as part of those who were being investigated for corruption.

Mr Kimemia was later cleared of all accusations and easily won the Nyandarua gubernatorial seat. Since he left, a substantive holder is yet to be appointed to the constitutionally created position of secretary to the cabinet. “They have been talking a lot in recent days and it is obvious the President appreciates him,” said a source.

The President’s reliance on his predecessor’s key men started after the decision of the Supreme Court invalidated his election and called for a repeat election.

His handlers trace the decision of the Supreme Court to the Jubilee Government’s lack of interest in ensuring it had a firm grip on the Judicial Service Commission —  the key player in the running of the Judiciary, including appointment of judges.

President Kenyatta goes for Kibaki’s key advisers ahead of polls Reviewed by samrack on October 14, 2017 .

President Kenyatta goes for Kibaki’s key advisers ahead of polls President Uhuru Kenyatta has embarked on a series of changes that have seen some influential individuals who worked for his predecessor Mwai Kibaki playing a bigger role as his advisers. The need for more experienced hands, according to insiders, is informed by a set of