Just days after the High Court temporarily slammed the brakes on her criminal prosecution, investigators analysing Mwilu’s accounts have flagged what are alleged to be suspicious transactions.

A report by the detectives seen by the Star indicates that Mwilu owns at least seven houses in upmarket Kilimani estate, one along Argwings Kodhek Road, two off Ndemi Road and another property in Athi River.

It is based on the movement of huge sums and transactions that caused investigators to suspect that the top judge could be involved in money laundering.

“The nature of the identified account transactions and properties indicate a high possibility of fraud and money laundering,” the investigation report states.

Mwilu was facing 13 counts of abuse of office, tax evasion and fraudulent recovery of loan securities before her prosecution was temporarily halted last week.

On March 16, 2016 — a few months before she joined the Supreme Court — Mwilu allegedly bought a parcel of land LR3734/1129 from Mutunga and Company, a firm associated with ex-CJ Willy Mutunga, for Sh2.8 million.

However, hardly two months after the purchase, the judge received Sh75 million from Forest Japan Hospital and 74 million from an unknown entity, allegedly from the sale of the same piece of land.

“Theoretically, this imply that the subject bought the property at the price of Sh2.8 million on 16/3/2016 from Justice Mutunga’s company and sold it at a price of  Sh75 million to Forest Japan Hospital and Sh74 million to another unknown entity,” documents by DCI detectives read.

According to the analysis of the bank transactions, Mwilu paid Sh15 million to Kibwezi West MP Patrick Musimba in 2013, which she told detectives was a refund for failed purchase.

However, detectives noted that there was no evidence of any payment from the MP to Justice Mwilu.

At around the same time, Musimba’s election had been nullified by Justice Majanja following a petition by former lawmaker Kalembe Ndile.

This was allegedly paid for purchase of property in Lavington.

However, investigators say the property description, including LR numbers, was not provided.

During the same time, there were other cash and cheque deposits into Mwilu’s accounts totaling Sh95.6 million.

There was also a deposit of Sh40 million from a firm identified as Raei Investments Ltd.

She, however, paid Sh56 million to Waruhiu and Company Advocates and 35 million to Imperial Bank.

The top judge operates six banks accounts, two at Standard Chartered Bank, another two at CFC Stanbic, one at Kenya Commercial Bank and the other at Commercial Bank of Africa.

In a painstaking probe of the country’s second most powerful judge, the detectives combed through details at Kenya Power and Nairobi Water and Sewerage Company to get details of Mwilu’s properties.

The DCJ is said to have failed to file her tax returns in 2016.

“Some of the identified assets were also under-declared in the subsequent tax returns,” the detectives said.

Details from the investigators indicate that Mwilu applied for a Sh80 million loan from Imperial Bank, now under receivership, on August 15, 2013.

The loan was approved within one week, without Mwilu having an account with the bank. 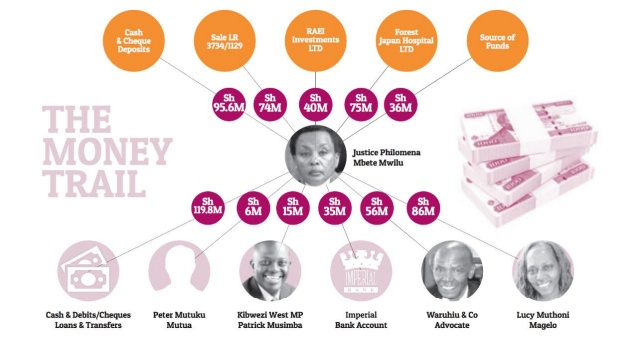 But on September 6, 2013, a savings account in the name of A1 c/o Sweet Soil was created and one month later Sh12 million was internally wired into the account.

On November 11, 2014, another Sh10 million was deposited by bank staff to Mwilu’s account, which detectives described as mysterious and in total disregard of bank procedures.

Last week, High Court judge Chacha Mwita suspended the Deputy CJ’s prosecution until October 9, when he will hear the matter.

Mwilu has claimed that there is a grand scheme to remove her from office for her role in nullifying President Uhuru Kenyatta’s election last year.

In an affidavit filed in court, Mwilu said that following threats made by President Uhuru Kenyatta after nullification of his first win, a series of events have targeted the Judiciary, specifically the majority judges.

The vote was 4-3 to overturn the presidential election outcome. Mwilu spoke forcefully and at length on why the election was null and void.

On Sunday, Judicial Service Commissioner Tom Ojienda said the arrest of Mwilu on Tuesday last week came as a ‘surprise and shock’ to members of the JSC.

The lawyer said the DCI and the Director of Public Prosecutions invaded their meeting at the Supreme Court last Tuesday to arrest the judge.