‘Our Relationship is Not Made from This World’, Murder Suspect Jowie Irungu’s Wife Says

‘Our Relationship is Not Made from ThisWorld’, Murder Suspect Jowie Irungu’sWife Says

A day after releasing his first gospel song, murder suspect Joseph ‘Jowie’ Irungu has revealed he is married and has a daughter.

Irungu in an interview with Kiss FM presenter Jalang’o on Thursday said the girl featured in his debut song dubbed ‘Nishikilie’ is his daughter.

“That beautiful girl in the song is mine. She is my daughter,” he said.

Irungu, who is the prime suspect in the murder of 28-year-old Kenyan business lady Monica Kimani, further said he is married to the girl’s mother, Eleanor Musangi, alias Ella, who doubles up as his manager.

During the interview, Jowie said friends deserted him after he was charged with murder and thanked his parents and wife for standing by him.

“I would like to thank all those people who stood by me. Of course my mum, dad, and my wife Ella,” he said. “I don’t have friends. It’s either family or no one… All my friends let me down. Only my family supported me.”

In an interview with Tuko, Musangi, a professional model who describes herself as a servant of God, said she was led to Jowie by the holy spirit at a time when everyone but his family abandoned him. 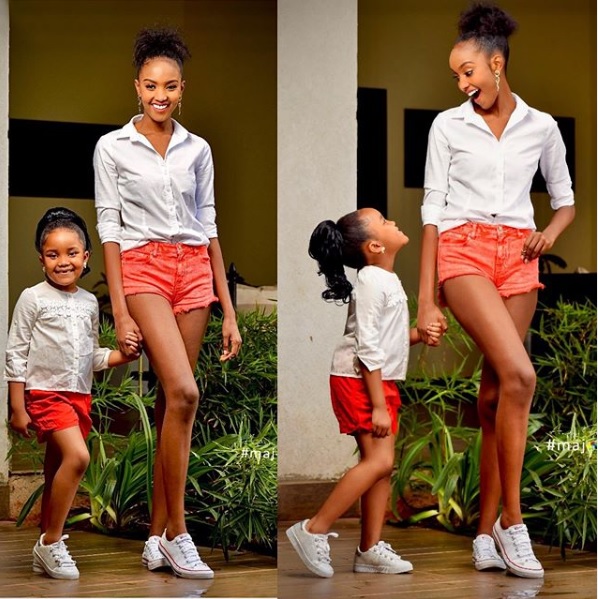 “God had to break me to be able to see myself, to be able to see the world and to understand its purpose, and it was from that point that when I met Jowie I was able to take him and to cover him without seeing that other side that everyone else was seeing. God asked me I nurtured you, I built you and I made you strong, I want you to do the same for him and don’t be afraid for I am with you,” she told Tuko.

“I actually don’t know Jowie that much, I met Jowie through a divine intervention when all this saga was happening, the holy spirit spoke to my heart and told me, ‘I want you to love that man and I want you to care for him’, I didn’t know him,” she added.

Musangi declined to talk much about her daughter but she confirmed Jowie was her biological father.

On his relationship with journalist Jacque Maribe, Jowie said they separated when he was still detained at Kamiti Prison.

“I decided not to (keep in touch) as in ile tuu we broke up while I was still inside, we talked and let this go. We check up on each other once in a blue moon,” Jowie said.

Irungu was charged with the murder of Monica alongside journalist Jacque Maribe, who was his girlfriend. He was released on a Sh2 million bail in February this year after spending 15 months in prison.

Monica was found brutally killed in her rented apartment at Lamura Gardens in Nairobi’s Kilimani area in September 2018.

Her mutilated body had been dumped in a bathtub with hands and legs tied, and throat slit. She had just returned from Juba, South Sudan, where she was reportedly running a family business.

My battle with Covid-19: A reporter’s experience

KACRF Initiative concludes after sending over $10,000 to Kenyans in America affected by COVID

KACRF Initiative concludes after sending over $10,000 to Kenyans in America affected by COVID