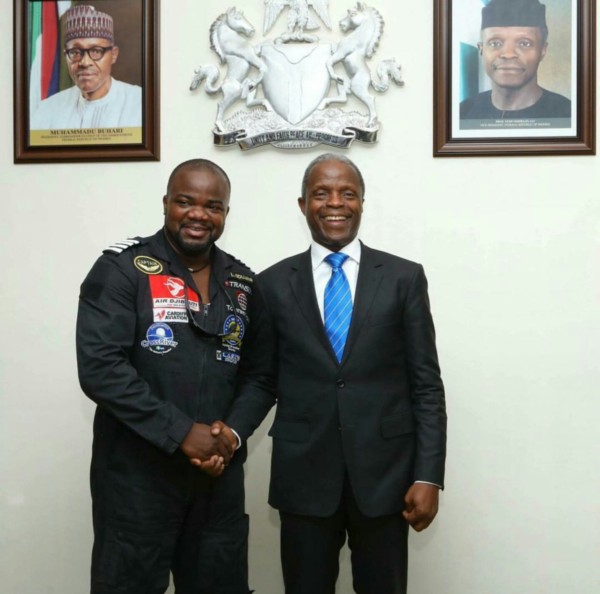 The Vice President, Prof. Yemi Osinbajo, on Wednesday, said that Nigerians are some of the smartest and most creative persons around the world.

The VP said this when he received on a courtesy visit to the Presidential Villa,Capt. Lola Odujinrin, the first African to fly around the world as a solo traveller.

He said: “The country (Nigeria) is blessed with great talents and Nigerians are among some of the most creative and smartest persons around the world.

“Your story is really fascinating and I am extremely proud of what you have done and more that you are a Nigerian.

“And I am very sure that just as we took over the entertainment industry, we will certainly break new grounds.’’

The vice president, who was full of praises for the young pilot and his team’s achievements, said “this is the sort of thing that people should hear especially young people.

“It is really inspiring and younger people must begin to learn from your experience and story, and I’m glad that you achieved this feat.

“Also, the team is entirely Nigerian and that by itself is certainly a good thing and I’m sure this portends even greater things for us in the future’’.

On the pilot’s humanitarian project, Osinbajo said that he looked forward to supporting the project, but advised that it should be on a scale.

“Whatever you plan to do in this area must be on a scale because the most important thing you have to focus on is scale so that it can be expanded.’’

Earlier, Odujinrin said his goal was to put Nigeria on the world map by being the first African to “go around the world as a solo pilot and achieve that humanitarian aspect of the dream’’.

In his brief narration about his world flying project, Odujinrin said it was first inspired by his dream to fly aircraft at the age of 10.

According to him, “it is important to share my story in order to inspire kids, adults and everyone about the struggles I went through in life’’.

Odujinrin flew several hours to 25 countries and made 35 stops in nine months, making him the first African to attain the feat.

Vice-President, Prof. Yemi Osinbajo, on Wednesday received Africa’s first pilot to fly solo round the world, Ademilola Odujinrin, Osinbajo receives Africa’s first global solo pilot, to support humanitarian project The Vice President, Prof. Yemi Osinbajo, on Wednesday, said that Nigerians are some of the smartest and most creative persons around the world. The VP said this