Ngilu To Be Charged On Friday With Frustrating Investigations 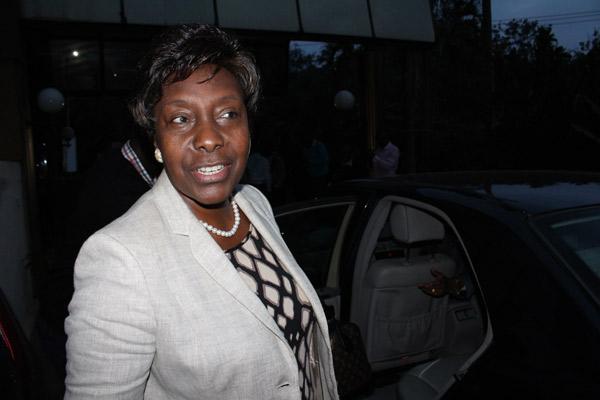 SUSPENDED Lands Cabinet Secretary Charity Ngilu will be charged on Friday with obstruction of investigations into the controversial series of transactions concerning 134 acres in Karen.

Director of Public Prosecutions Keriako Tobiko on Wednesday directed that Ngilu be charged for the offence, following a recommendation by the EACC.

Ngilu presented herself to EACC on Wednesday evening after Tobiko confirmed she will be charged with the obstructing investofations into the 134 acres Karen land scam.

She told reporters at Integrity House that she is expecting to be charged on Friday.

The EACC says that Ngilu obstructed investigations into the scam by directing her ministry’s officials not to release documents or record statements with investigators.

“Having reviewed the evidence, I am satisfied that the recommended charge is sustainable. I have therefore accepted EACC’s recommendation that the CS be charged with the offence of obstruction.”

Ngilu becomes the second CS in President Uhuru Kenyatta’s government to be charged, following investigations ordered by the head of state.

Transport CS Michael Kamau has already been charged in court for abuse of office after the EACC concluded that he had changed a road design, leading to loss of public funds.

Ngilu and Kamau are among five CSs who were suspended by the President after being adversely mentioned in a corruption dossier he tabled in Parliament on March 26.

The others are Kazungu Kambi (Labour), Davis Chirchir (Energy) and Felix Koskei (Agriculture).

However, the EACC is still holding on to another file where she is accused of having influenced the sale of land off State House Crescent, Nairobi.

Ngilu has maintained her innocence and has said that there exists a cartel in the Lands ministry that is eager to get her out of the way because of her reforms.

Tobiko approved the prosecution of Chief Land Registrar Sarah Mwenda, and her deputy Geoffrey Birundu, the Senior Deputy Director of Survey and Registrar of Titles.

Also to be charged is Jos Konzolo, a director of Telesource Com Ltd, the company said to have been irregularly allocated 134 acres in Karen.

The land has been double allocated to Horatio Da Gama Rose of MS Muchanga Investments and Konzolo.

the DPP also approved the prosecution of Ganze MP Peter Safari Shehe over the misappropriation of Constituency Development Fund cash.

“Having reviewed the file, I am satisfied that the evidence discloses criminal culpability on the part of the MP, the CDF officials and the directors of the respective companies. I therefore concurred with EACC and directed prosecution to ensue,” Tobiko said.

Tobiko disagreed with the EACC that a file on Trans Nzoia county be closed and returned it.

The EACC had said that it had found no evidence that the Trans Nzoia government irregularly acquired Vipul House in Kitale for use as the Kitale Referral Hospital.

Ngilu To Be Charged On Friday With Frustrating Investigations Reviewed by samrack on June 17, 2015 .

SUSPENDED Lands Cabinet Secretary Charity Ngilu will be charged on Friday with obstruction of investigations into the controversial series of transactions concerning 134 acres in Karen. Director of Public Prosecutions Keriako Tobiko on Wednesday directed that Ngilu be charged for the offence, following a recommendation by the EACC. Ngilu presented herself to EACC on Wednesday