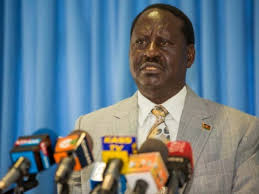 The Opposition has repeated its threat to boycott the October 17 presidential election if the electoral commission does not address its grievances. The Opposition chiefs led by Raila Odinga said on Tuesday there would be no election if the Independent Electoral and Boundaries Commission (IEBC) Chief Executive Ezra Chiloba and his team do not step aside.

Two NASA MPs defy Raila’s order, attend Uhuru’s address Raila urged his supporters to march to IEBC offices to force the officials out if they do not quit. “IEBC is the thief that stole the elections on behalf of Jubilee. This is the Kibra Declaration. There will be no election on October 17 if our demands are not met. It will not happen,” said Raila. NASA has listed nine issues it termed as the ‘irreducible minimum’ for the fresh elections, including contracting a new printer for poll materials and exclusion of 11 poll agency officials the Opposition accuses of messing up last month’s election. They also demanded a shake-up of the ICT infrastructure, including results transmission, and appointment of new returning officers for the 290 constituencies. Raila also demanded that election materials be printed by another firm other than Dubai-based Al Ghurair Printing. According to NASA, Al Ghurair printed non-standardised election result declaration forms which were used in the presidential elections nullified by the Supreme Court. “Another printer should be contracted to print ballot papers and result declaration forms in the fresh elections. We will not agree to go into an election with Al Ghurair as the printing firm. These are our bare minimum,” said Raila. He said NASA is ready to participate in the elections but not under the conditions set by the Jubilee administration and IEBC. Raila also said that before they participate in the election, IEBC must comply with the Supreme Court orders of opening up the IEBC servers for read-only access. ALSO READ: Two NASA MPs defy Raila’s order, attend Uhuru’s address His running mate, Kalonzo Musyoka, accused the Wafula Chebukati-led commission of treating the Opposition with contempt when they went to the IEBC offices for an official meeting. Mr Kalonzo said Mr Chebukati refused to meet them, only for them to find a document detailing the election operations plan which, according to NASA officials, still contain what they want addressed. Amani National Congress (ANC) leader Musalia Mudavadi questioned why the electoral agency was asking for Sh12 billion for the fresh elections yet they had budgeted for Sh40 billion. “Kenya is almost bursting because of the expensive election which was bungled. They must account for the funds because it is Kenyan taxes and someone must take responsibility,” said Mudavadi. Bungoma Senator Moses Wetang’ula questioned why after the indictment of the Supreme Court, nobody at IEBC had taken responsibility. “We are not interested in IEBC uniting… IEBC should…identify those who are culpable,” he said.
Source: https://www.standardmedia.co.ke

NASA leader Raila Odinga declares no election if demands are not met Reviewed by samrack on September 12, 2017 .