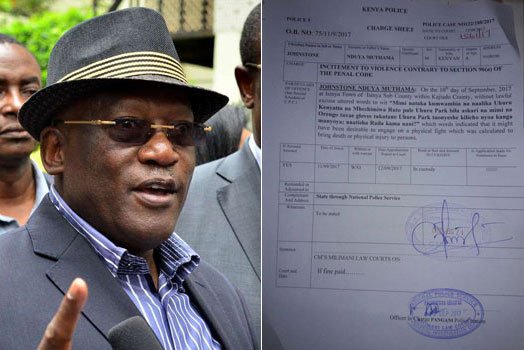 Kenyans have reacted in shock after former Machakos senator Johnstone Muthama was charged with inviting the president and his deputy for a physical fight at Uhuru Park.

The prosecution says the words indicated that it might have been desirable to engage in a physical fight which was calculated to bring death or physical injury to persons.

He was released on Monday on a cash bail of Sh300,00 or a bond of Sh500,000 with a Sh1 million surety. He was ordered to handle himself in good conduct pending the trail.

A copy of Muthama’s charge sheet containing the charges that some have slammed as ridiculous has been shared widely on social media.

HERE’S MUTHAMA’S CHARGE SHEET THAT HAS SHOCKED KENYANS Reviewed by samrack on September 12, 2017 .