NASA due to unveil venue of Raila ‘swearing-in’ at 2pm 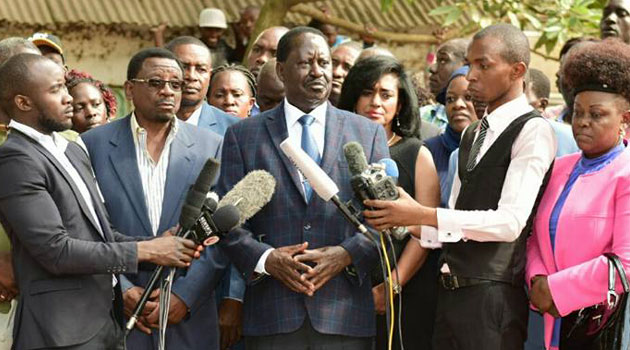 NASA due to unveil venue of Raila ‘swearing-in’ at 2pm

The opposition NASA is on Sunday set to unveil the venue of the swearing-in of leader Raila Odinga on Tuesday this week.

According to the coalition’s organising committee, the inauguration of Raila and Kalonzo Musyoka is constitutional and legal in all regards.

NASA in a press briefing held on Saturday clarified that the only issue was where they would swear-in Musyoka.

Chief Executive Officer (CEO) of the People’s Assemblies Organising Committee Jared Maaka Siso said one of the options they are considering is swearing-in Kalonzo as Deputy President outside the country.

He stated that the coalition is in consultation to see to it that the Wiper Party leader is sworn in.

Last week, NASA unveiled the People’s Assembly roadmap that they say will lead to a fresh election in the first quarter of 2018, a culmination of a series of milestones that the coalition has been pushing.

Speaking at Okoa Kenya during the official unveiling of the roadmap, Orange Democratic Movement (ODM) Executive Director Oduor Ong’wen said the end game of the People’s Assembly will be to push for a fresh free and fair election within the first half of 2018 or pursue avenues for self-determination for those who believe in democratic constitutionalism.

He also raised an alarm accusing companies, he did not name, of profiting from bad governance at the expense of democracy and the people.

According to Ong’wen, the People’s Assembly will be held at two levels – county level and national level – with the constitutive assembly being held on December 12.

So far, 12 County Assemblies have passed the motion even as the Attorney General Githu Muigai said by passing the motion, the Assemblies have in effect handed the power awarded to them by the electorate back to the people.

The mini Council of the People’s Assembly which was recently held at Maanzoni Lodge and the establishment of the organising committee forms a crucial part of the roadmap according to NASA.

The coalition now moves to the second level of the milestones with the convention of the Constitutive People’s Assembly at the national level on Tuesday at an unspecified location.

NASA due to unveil venue of Raila ‘swearing-in’ at 2pm Reviewed by samrack on December 10, 2017 .