The special independence gifts given to newly-free Kenya 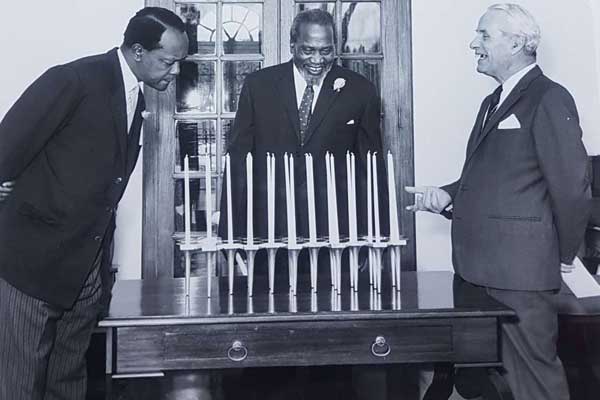 The special independence gifts given to newly-free Kenya

According to documents from the former Colonial Office seen by Nation in London, the gifts included a silver-gilt table centrepiece and a bookcase for Parliament.

But there was also a personal gift of Royal Lodge Sagana from Queen Elizabeth.

It was a British custom that whenever a country became an independent member of the Commonwealth, gifts should be presented from the British Government and the House of Commons.

These gifts were specially designed with emphasis placed on modern British design and craftsmanship.

A gift from the House of Commons was always presented just after independence and always took the form of a Speaker’s chair or a mace.

In Kenya’s case, it was agreed that a bookcase containing constitution and parliamentary works be given.

However, before the design and construction of the silver-gilt table centrepiece started, Sir Malcolm MacDonald, the Governor-General of Kenya, was asked by an official at the Colonial Office, to seek the opinion of Prime Minister Jomo Kenyatta.

“We would be grateful…if you could have an informal word with your prime minister, and with other senior ministers at your discretion to ascertain whether a silver-gilt table centrepiece would be an acceptable gift from the British Government to the Kenya Government on independence.”

Around this time, New Zealand, which also had a gift for Kenya, contacted the Colonial Office to ask if its gift of despatch boxes and two letter racks for use in the Kenyan Parliament was acceptable. There was also a set of 50 books.

“As I understand, you are handling the coordination of independence gifts to Kenya; I am writing to enlist your assistance on the question of a gift from New Zealand for this purpose,” read a letter from New Zealand High Commissioner to Britain, A.T Gibbs, dated October 7, 1963.

The despatch boxes were made of carefully selected New Zealand timbers — rimu, Kahikatea and puriri — specially seasoned to withstand tropical conditions and were laminated to a thickness of one inch to ensure solidarity. They were made by the New Zealand’s Disabled Servicemen Training Centre.

After discussing with his Cabinet ministers, Mzee Kenyatta approved the proposed gifts “with gratitude and pleasure”.

Then there was the personal gift to Kenya of Royal Lodge Sagana in Nyeri from Queen Elizabeth ll.

In November 1947, as a princess, she was given what is now Sagana State Lodge as a wedding gift by her father, King George VI.

She rarely used the lodge and is known to have been there only once in 1952 before she ascended to the throne after her father died while she was in Kenya.

It was against this backdrop that she instructed one of her courtiers to inform Sir MacDonald, that she “would be happy to hand over Royal Lodge Sagana to the Government of Kenya on the occasion of its independence”.

Sir MacDonald revealed the Queen’s offer to Mzee Kenyatta in a private conversation: “Her Majesty feels that the lodge should not remain this neglected and empty and wonders whether it might be a helpful idea for her to celebrate the occasion of independence by presenting it to the Kenya Government in some appropriate way.”

But according to a letter from Sir MacDonald to Buckingham Palace dated August 1, 1963, Mzee Kenyatta regretted that the Queen and other members of the royal family were not able to use the lodge. He was reluctant to accept the gift since “the people of Kenya knew with pleasure that the house had been a gift to the Queen.”

Mzee Kenyatta told Sir MacDonald that he wouldn’t want Sagana to be turned into a place for accommodating tourists.

But when Sir MacDonald suggested that it should be set aside for the entertainment of special government guests, the Kenyan leader agreed and expressed hope that members of the royal family would feel free to stay at the lodge whenever they visited Kenya — and proposed that “a plaque be built into the lodge recording its special association with Her Majesty”.

Meanwhile, Atholi Hill, a young designer with the British Ministry of Public Works who was chosen to design the silver-gilt table centrepiece, had already produced his draft design and submitted it to a panel for consideration.

It was approved by a panel of Mr Leaf and Glover of the Ministry of Public Works, and Mr Hughes — the Art Director of the Goldsmith Company — with suggestions on where inscriptions were to be made.

The approved design was eventually passed on to Frank Beak of Wakely and Wheeler Ltd, who built it using sterling silver, and the engraving done by T.C.P Wise Ltd.

Although the Secretary of State had expected the gift to be delivered exactly on Independence Day, it was not until February 4, 1966, when it was officially presented to Kenya.

The delay had been anticipated by an official in London, who wrote to the Governor-General of Kenya saying: “It is unfortunately unlikely that the gift could be designed and completed in time for the presentation on December 12, 1963, since every gift of this nature is specially prepared and no two are alike. It would, of course, be presented as soon as it is practically possible.”

The finished gift, which weighed around 11kg, was presented to Mzee Kenyatta in the presence of Mr Charles Njonjo, by Sir MacDonald, who was now serving as the British High Commissioner to Kenya after independence.

It consisted of three table candelabra, which could be used separately or placed together to form one large one.

The centre candelabra (a large candle holder with multiple arms) was about 13 inches in length, 9 in width and 6 in height and carried 12 candles.

Each of the other two candelabra was about 9 inches in length, 9 in width and 6 in height, and carried six candles.

The candelabra were made up of identical units which were hexagonal heads on tapered shafts and the units were linked at the heads by a heavy gilt wire which formed a regular grid between units.

The central unit of the large candelabra was engraved with the words “from Great Britain to Kenya.”

In the centre of the smaller candelabra were, one, the Royal Arms and, on the other, the Arms of Kenya.

Kenya also received gifts such as a 400-year-old amour suit which was originally worn by an ancient samurai warrior from Japan, Senate speaker’s chair from India, radio receivers for the establishment of Kenya News Agency from the Soviet Union, twenty-four 2.5 lorries from America, Karen Blixen House from Denmark, one jeep ambulance from Israel and 10 ambulances from West Germany, among many other gifts.

The special independence gifts given to newly-free Kenya Reviewed by samrack on December 10, 2017 .