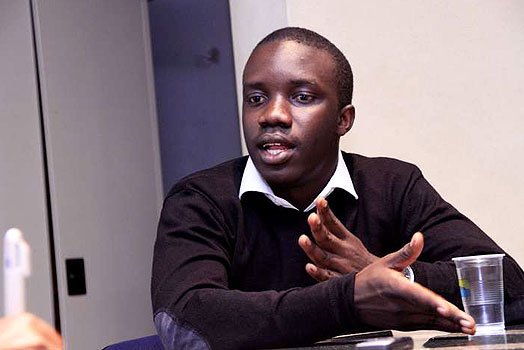 Wycliffe Omondi, one of the developers of the Magic Bus Ticketing app. PHOTO | DIANA NGILA

Developers of Magic Bus Ticketing, a mobile phone application that enables booking of public transport, have secured a Sh101 million ($1 million) grant from a Bill Clinton-backed fund after emerging top out of six finalists.

The Hult Prize finalists were crowned overall winners of the startup funding for their idea of digitising booking, pre-payment and on-board payment of fare for commuters in Kenya.

The idea was borne out of a challenge for the Hult Prize, funded by Clinton, whose contest this year was the creation of a better model to connect people to goods and services in crowded urban spaces.

The contest received over 25,000 entries which were shortlisted to six finalists.

The team opted to pilot the idea in Kenya with matatus from Ongata Rongai and Buru Buru available for booking and prepayment on the app.

“In Kenya there is good mobile connectivity and matatus are already in saccos which makes it easier to deal with than going to individual matatus.

It was a ready market and we had connections with the saccos,” said Mr Omondi in an interview with the Business Daily. The offline app works via a short code (USSD), which prompts the user to follow a menu of instructions.

The short code instructs the user to select their route, pick-up and drop-off points before offering the selection of matatus that are available and the estimated pick-up time.

Once a user selects their vehicle of preference, they proceed to pay and move to the bus stop within the expected arrival time of the vehicle.
In addition to the pre-booking and prepayment, commuters can track the position of the vehicle in real time.

Those already on board can pay for their fare via the same service. The team has been working to get long distance travel companies on board to cut the need for commuters to walk to bus offices to make bookings and payments.

“We’re looking to start piloting for long distance in September. The piloting is to go until January for robust market research before we formally launch and also expand into other markets,” said Mr Omondi.

The group had received funding of $10,000 (Sh1 million) from French based Transdev after they were shortlisted as one of the three top picks for transport apps along with Maramoja Taxi and My Ride.

According to Mr Omondi, the team will invest the funds in further research and growth of the business. The team is also looking at the alternative of managing its own fleet in addition to having the service for use by other organised groups.

“We are looking at a franchise model where there are standards that must be followed to use our service,” he said. Matatu and bus crew are allocated tablets that are used to indicate the number of seats available and prevailing charges.