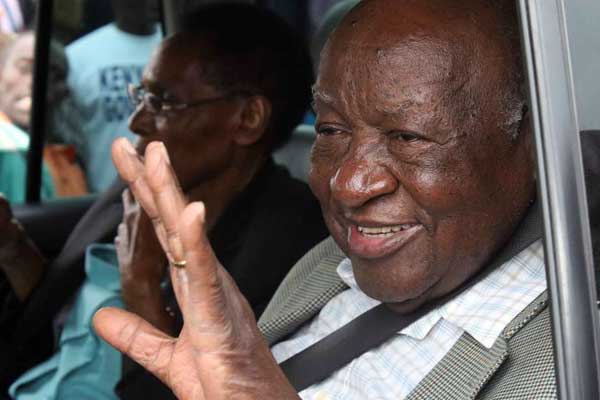 Kenneth Matiba, Kenya’s multiparty hero, has died at the Karen Hospital in Nairobi on April 15, 2018. He was aged 85. FILE PHOTO | NATION MEDIA GROUP

Mr Matiba died Sunday afternoon at the Karen Hospital In Nairobi, his daughter Ivy has confirmed.

His body has been transferred to the Lee Funeral Home.

He was instrumental in the successful fight to introduce multiparty politics in Kenya in the 1990s.

In the 1992 presidential election, Mr Matiba emerged second, losing to former President Daniel arap Moi, who had held him in detention without trial for agitating for pluralism.

Matiba was held without trial at Kamiti Maximum Prison in 1990 together with politician Charles Rubia and Raila Odinga.

They were arrested and detained on July 4, 1990 for demanding the re-introduction of multi-party democracy. Their arrests were meant to pre-empt a rally that had been planned by opposition leaders at the Kamukunji grounds in Nairobi on July 7. The rally had been baptised Saba Saba.

While in prison, Mr Matiba suffered stroke, which affected a large part of his body leaving him incapacitated for some time.

During a court hearing in 2015, Dr Dan Gikonyo, a heart specialist, testified that Mr Matiba suffered a stroke on May 26, 1991, but remained in detention until June 4, 1991, even after a head scan confirmed he was bleeding in the brain and needed urgent medical attention.

He was later released, after the government allowed multiparty politics.

In August 2017, Matiba was awarded Sh504 million for his detention.

In his ruling, Justice Isaac Lenaola, now a judge of the Supreme Court, said the award should act as a reminder of the dark days of the Nyayo era.

Justice Lenaola noted that Mr Matiba suffered a stroke in 1991 but remained in detention for a week without medication.

In May 1963, he became the first indigenous African Permanent Secretary for education.

In 1964, he was appointed Permanent Secretary in the Ministry of Commerce, then headed by retired President Mwai Kibaki.

Matiba eventually left his civil service career and ventured into hospitality industry, establishing the Alliance Group of Hostels based on the South Coast.

During the regime of retired President Daniel arap Moi, Matiba was detained.

In 2000, he released his autobiography Aiming High.