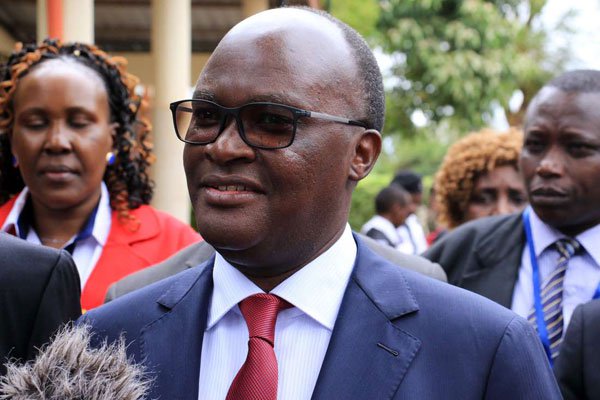 The National Assembly has directed that Transport Cabinet Secretary James Macharia be interrogated by MPs on Thursday over a government directive for all imported cargo to be transported from the port of Mombasa to Nairobi by the Standard Gauge Railway (SGR).

The Kenya Revenue Authority (KRA) and the Kenya Ports Authority (KPA) issued the directive last Friday through newspaper advertisements, ahead of the start of the process on August 7.

It stated, “All imported cargo for delivery to Nairobi and hinterland shall be conveyed by SGR and cleared at the Inland Container Depot (ICD) in Nairobi while all cargo intended for Mombasa and its environs shall be cleared at the port of Mombasa.”

But there has been opposition by Coast politicians, hauliers, freighters and other interested parties.

On Tuyesday, Deputy Speaker Moses Cheboi (Kuresoi North) used his discretion, in line with the House rules, to have the CS appear before the House Committee on Transport as MPs aired their views on the matter raised by Mvita MP Abdulswamad Shariff.

“I order that the CS appears before the Transport committee on Thursday this week,” Mr Cheboi said

as the House, under his directive, adjourned at 5.30pm.

The matter has caused a lot of anxiety in the transport sector and the Coastal region.

KRA, which falls under the National Treasury, and the KPA, that is under the Ministry of Transport, cited efficiency as the reason for the order to abandon road transport.

However, MPs want CS Macharia to face them and explain the basis upon which “they came up with the directive”.

A majority of the MPs in the House rallied behind Mr Shariff and opposed the directive saying that if implemented, it will be a recipe for loss of jobs with a debilitating effect on the economy, for an industry that supports over a million lives.

“The mood of this House is that this is very wrong. It was done without the necessary consultation and was not backed up by regulations,” Mr Shariff said.

“You cannot just wake up one morning and say all the cargo from Mombasa to Nairobi be transported through the SGR. This matter must be addressed before we go on recess and you must direct CS Macharia to come and explain [it] to this House,” he added.

The House proceeds on a long recess on Thursday.

Mr Duale further noted that Kenya is a liberalised market economy so cargo owners who may want to drop their containers along the way – in Voi, Mlolongo and other parts – will be seriously inconvenienced.

More than 20 CFSs that have invested Sh12.5 billion in the region and over 800 trucks that operate daily in Mombasa may not get business if the new directive is implemented, rendering thousands jobless.

This is in on top of the imminent closure of lodges and restaurants that depend on the trucks, not only at the Coast but also in other parts of the country, where truck drivers and conductors eat and are accommodated.

Mr Mbadi wondered why the directive would be issued without consultation.

“This matter must be investigated. The government cannot force the people of Kenya to sanitise a project so that it can break even. It is a weighty matter,” Mr Mbadi said.

Truck owners who have been hardest-hit since introduction of freight train service over a year ago have decried loss of business, with some planning to dispose of the vehicles.

Five MPs from the region, led by Mr Shariff, later addressed the media and heap pressure on the government to abandon the plan.

“Usually, such a move would be predicated by way of regulations duly brought to the House for consideration by members. The forceful use of the SGR is therefore unconstitutional,” Mr Shariff said in the company of MPs Mishi Mboko (Likoni), Khatib Mwashetani (Lunga Lunga), William Mwamkale (Rabai) and Ruweida Mohamed (Lamu County Woman Representative).

Mr Mwashetani said the cost of living should not rise “because of the interests of some people” while Ms Mboko said the SGR lacks capacity to handle the cargo at the port of Mombasa.

Stakeholders in the industry have protested against the government’s move, saying the mandatory rule violates the World Trade Organization (WTO) agreement for free flow of cargo by the most cost-effective means.

Kenya is a signatory to the rules.