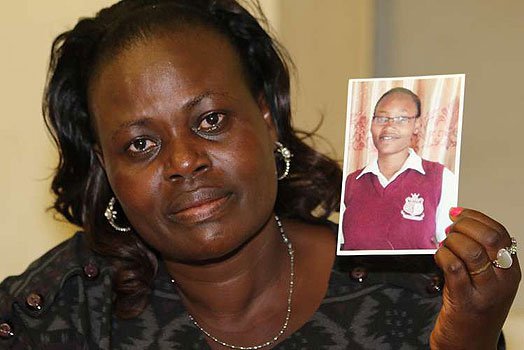 Mrs Sally Chepngetich Bett with a picture of her daughter Emily who died of meningitis. She was a student at Our Lady of Mercy Secondary School in Nairobi. PHOTO | WILLIAM OERI

“She would have been sitting her examinations now and I would be anticipating good results,” a distraught Mrs Sally Chepngetich Bett says of her daughter, who died in school of an illness that could have been treated had immediate action been taken.

Her daughter, Emily Chelang’at, a Form Three student, died a year after being infected with meningitis at Our Lady of Mercy Secondary School in South B, Nairobi.

And though her daughter has long been buried, Mrs Bett’s pain has not gone away as her quest for justice has hit a brick wall.

What pains Mrs Bett most is that Emily was neglected for over two weeks after she complained of severe head and back aches.

Mrs Bett says she only learnt of her illness on the closing day of the first term in April last year.

“When I got at the school on closing day, Emily’s friends told me she was very sick and could not stand on her own. When I saw her, she could not walk,” said Mrs Bett.

She said on asking why she had not received medical attention and why her parents had not been notified, Emily said she had notified the matron who dismissed her, saying she was trying to avoid school.

“Asked to explain why my daughter was denied medical attention, the matron said the school did not have an equipped dispensary and that I was just in time to take her to hospital,” Mrs Bett said.

She said the matron walked away when she demanded to know why she was not contacted to take her daughter to hospital.

Mrs Bett said Emily told her she had shared a bed with a Form Two student who had similar symptoms. This student had not returned to school after the mid-term break.

Emily was taken to a hospital in Namanga but her condition worsened and she was moved to Nairobi West Hospital in a semi-coma.

“She was diagnosed with meningitis and was rushed to the ICU where she stayed for five weeks,” she said.

Doctors said had she been brought earlier, the disease would have been detected and treated.

“In ICU, my daughter went blind and part of her body became paralysed. She was taken for home care and was attended to by medical personnel who included a physiotherapist, but they stopped due to the huge unpaid bill,” she said.

She said it was during this time that she learned that the student Emily had shared a bed with had died during the mid-term recess.

At around the same time, Mrs Bett’s employer, the Ministry of Lands and Housing, suspended her salary following a dispute with a senior official, so she could not use her medical insurance. She was also transferred, despite appeals that her daughter was ill.

After eight months of home care, Emily died on March 4, 2016 and Mrs Bett and her husband informed the school.

“No one came to visit or bothered to call back. The school contributed Sh40,000 towards the burial but her friends were not allowed to attend the burial,” said Mrs Bett.

Emily’s parents visited the school on several occasions to seek answers and to collect her belongings but the watchman said he had been instructed to keep them away.

“The head, a Mrs T. K. Kiruja, was very rude. On one occasion, she called police to come and arrest us but after hearing our story, they left,” said Mrs Bett.

The school wrote a letter to the County Director of Education claiming Emily left the school in April 2015. It said the student died after falling ill at home.

“The administration lied to the government,” she said.

When the Daily Nation visited the school, the deputy headteacher, who only identified herself as Mrs Chomba, first denied knowledge of Emily or the matter but on further questioning, she said she had heard the issue being mentioned but had no details. She denied knowing anything about Emily’s belongings.

Emily’s parents have written to Education CS Fred Matiang’i, Deputy President William Ruto and several other offices on the matter.

MOTHER’S PAIN OF LOSING A DAUGHTER DUE TO CITY SCHOOL’S NEGLECT Reviewed by samrack on October 24, 2016 .

Share thisFacebookTwitterPinterestEmailWhatsAppMrs Sally Chepngetich Bett with a picture of her daughter Emily who died of meningitis. She was a student at Our Lady of Mercy Secondary School in Nairobi. PHOTO | WILLIAM OERI MOTHER’S PAIN OF LOSING A DAUGHTER DUE TO CITY SCHOOL’S NEGLECT “She would have been sitting her examinations now and I would