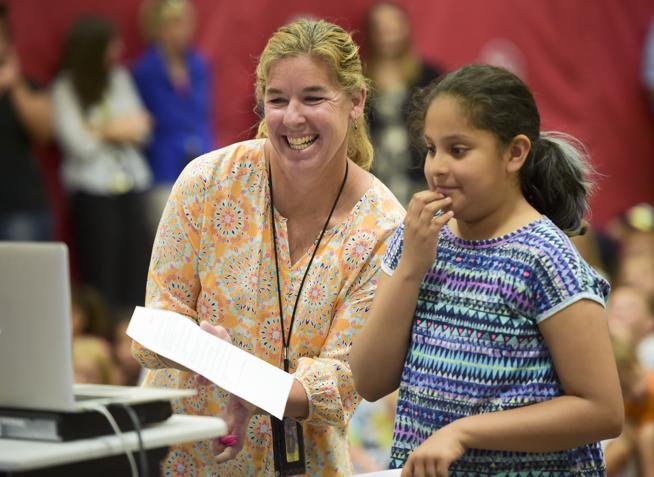 A Skype linkup between students at Eagle Crest Elementary School and Empakasi School in Kenya had to be hurried on Monday morning, as the nine-hour time difference meant that it was getting dark in Africa and the children had to get home safely, with lions and rhinoceroses getting close to the school.

That concern was a stark reminder of the differences in the lifestyles of the two sets of children, who were much the same in every other respect. The linkup between the sister schools saw the students sing songs to each other, offer greetings and ask (and answer) questions.

It was organized by the Mwebaza Foundation, a 501(c)(3) group that promotes cross-cultural exchanges between partner schools in Colorado and Africa.

Mwebaza Foundation executive manager Devaki Douillard said that Eagle Crest has been partnered with Empakasi for two years, and they attempted a Skype linkup in 2015 but a bad connection meant that it wasn’t as successful as this year proved to be.

“We have fundraisers here for the school,” Douillard said. “We raise money for sustainability projects, like chickens that will then lay eggs that they can eat for lunch.”

When the children started asking questions, the subject of those chickens came up, with fourth-grader Brianna Galindo asking if the Kenyan kids were enjoying the eggs, to which came a resounding “yes” in reply.

Other questions asked by the Eagle Crest students included, “What games do you play for fun?” (Basketball and soccer), and “What do you do for fun with your family?” (Read books). The children really connected over bicycles when a Kenyan student asked how his American counterparts get to school in the morning.

The children at Empakasi sang two traditional African songs, and the Eagle Crest kids responded with two songs that included a rousing rendition of Toto’s “Africa.”

“This is super exciting,” said kindergarten teacher Hillari Hansen. “I visited Kenya last year as part of this project, and this is really special.”

As the Kenyan children were gathered in front of an iPad, running on batteries powered with solar energy that were donated by the Mwebaza Foundation, the teacher moved the device around the landscape to show the children that there were zebras grazing behind them.

In the end, the biggest challenge was keeping two schools’ worth of excited children quiet enough that everyone could be heard.