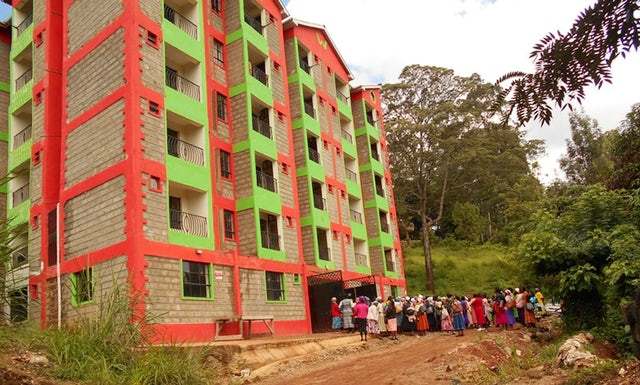 Murang’a County Women SACCO (MCWS), a five-year-old savings and credit cooperative with a membership of 25,000 has broken away from tradition when funding women’s businesses. Moving from the standard model of funding small holder farms and personal enterprises, the Sacco decided to invest instead in real estate.

By collectively pooling their savings, starting from as little as $0.10 per day, MCW Sacco members managed to raise $1 million towards the construction of a five-storey apartment building due to be opened in September. Once complete, the group intends to use returns from the apartments to build more financial muscle for branching into other businesses.

Grace Ndegwa, a small holder farmer and one of the group members explained that the building has opened a lot of opportunities for her. She sees that the building will put her in a more credit worthy position, giving her the ability to access bigger funds from banks and Saccos as she intends to venture into other businesses in future.

Ndegwa who says she has held the dream of one day starting a ‘meaningful’ business for fifteen years now sees the realization in sight. In a few months, she might finally reach that goal when she becomes a landlord in a country where only six per cent of women own any land according to Kenya Land Alliance.

In building the 102-room apartment block, the group had targeted to carter for the growing student population in Murang’a. Demand for student housing in many major towns has grown rapidly in recent years following the establishment of many tertiary institutions to bridge the higher education gap.

With the numbers beckoning, MCWS decided to take action. “We learned that Murang’a University College’s next intake will see the number of students double from the current 2,500. After we realized the magnitude of the housing problem in the county, we decided to invest in student hostels,” MCWS chairwoman Rose Wathigo says.

The apartment has a capacity to host 408 people at full capacity, generating over $10,000 in rent. Already MCWS management has planned to buy 2000 acres of land in Laikipia using the returns from the investment, which will be subdivided and each member given a portion.

Although members will be free to decide what to do with the land, for all of them, the greatest milestone appears to be the chance to overcome the cultural and financial limitations that prevent so many women in the country from owning land.

Share thisFacebookTwitterPinterestEmailWhatsAppKenyan women defy tradition to become landlords Murang’a County Women SACCO (MCWS), a five-year-old savings and credit cooperative with a membership of 25,000 has broken away from tradition when funding women’s businesses. Moving from the standard model of funding small holder farms and personal enterprises, the Sacco decided to invest instead in real estate. By collectively