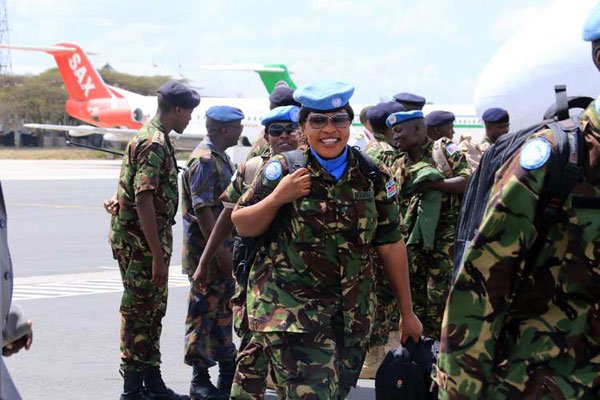 Angered by the dismissal of its three-star general from a United Nations peacekeeping mission in South Sudan, Kenya has now told off UN Secretary-General Ban Ki-moon, triggering a diplomatic row.

Kenya announced that it will not work with the global body’s peacekeeping department. It also accused the UN secretariat of “disrespect” and “bureaucratic arrogance.”

Kenya said the dismissal of Lieutenant-General Johnson Magoa Kimani Ondieki by Mr Ban was an “insult to us”.

“We know that some people were not happy with an African commander at the helm of the force. It boils down to that,” said Dr Monica Juma, the Principal Secretary in the Foreign Affairs ministry, in an exclusive interview with the Nation.

She said Kenya will also not send its soldiers to the proposed regional protection force for South Sudan, recently formed by the UN Security Council to join the roughly 12,000 UN peacekeepers serving there with a special mandate of protecting civilians.

She said Kenya had not received the UN report that recommended the dismissal of Lt-Gen Ondieki.

It all started on July 11, when South Sudanese troops allied to President Salva Kiir went on the rampage after winning a battle against his former Vice-President-turned rebel leader, Dr Riek Machar.

They stormed Terrain Hotel in the capital Juba, which is popular with foreigners, in one of the worst targeted attacks on aid workers in South Sudan’s three-year civil war. The soldiers are said to have raped foreign women, singling out Americans.

Dr Juma said before and after the raid, South Sudan had been hit by a wave of attacks on civilians — including at the Presidential palace — but the UN has not investigated the cases.

“What was so special with the Terrain Hotel attack? Why is the premium put on Terrain Hotel higher than anywhere else?” Dr Juma asked.

Diplomatic sources said the United States had put pressure on the UN to act after its civilians were hurt during the attack, which is described as not one of the worst in Sudan.

By the time of the Terrain Hotel attack, Lt-Gen Ondieki was only three months into the job as the force commander of the United Nations Mission in South Sudan. The Kenyan troops were stationed at the volatile Wau Town on the western bank of the Jur River, described as one of the most difficult territories in Sudan and yet the most stable.

During the attack, Lt-Gen Ondieki, who had not been inducted into the mission, is said to have asked an incident commander “to react”, as is the norm within the UN peacekeeping structure.

“What we know is that the contingent commander refused to carry out the command and he was reprimanded by Lt-Gen Ondieki,” said Dr Juma. “This was also communicated to New York but, surprisingly, this is not mentioned in the UN report.

“Instead, it is our commander who is being sacrificed.”

A UN team was picked to investigate the incident and the Kenyan commander was never called to defend himself against the allegations, said Dr Juma.

“They only visited Juba and flew back to New York,” says Dr Juma. “Lt-Gen Ondieki was then summoned in October 2016 and told that he was culpable.

“That is when he was asked to write a report.”

In September, Deputy President William Ruto and senior government officials and diplomats, who were in New York attending the UN General Assembly meeting, were kept in the dark regarding the inquiry, she added.

The surprise came two weeks ago, when they called Kenya’s deputy head of mission Koki Muli and told her they had a serious report that recommended the removal of Lt-Gen Ondieki.

“You cannot just casually tell me that,” Dr Juma quotes Ms Muli as saying. “Where is the report?” Ms Muli is said to have asked.

By this time, according to Dr Juma, Ms Muli was told it was not finished and she protested the manner in which the matter was being handled. She then called Nairobi, and that is when the Foreign Affairs Cabinet Secretary, Dr Amina Mohammed, demanded a copy of the report. She was given “a generic executive summary”.

So, far, Kenya has only received this executive summary and not the final report.

It is this handling of the matter that annoyed President Uhuru Kenyatta since the executive summary does not recommend Lt-Gen Ondieki’s removal but summarises the weaknesses within the UN mission’s structure.

“The President has a right to be angry, I can tell you he was mad at the treatment of his soldiers. Why do they single out Lt-Gen Ondieki if it is the structure that is wrong? If they have attributed failure to all the levels, why was our soldier made the sacrificial lamb,” said Dr Juma.