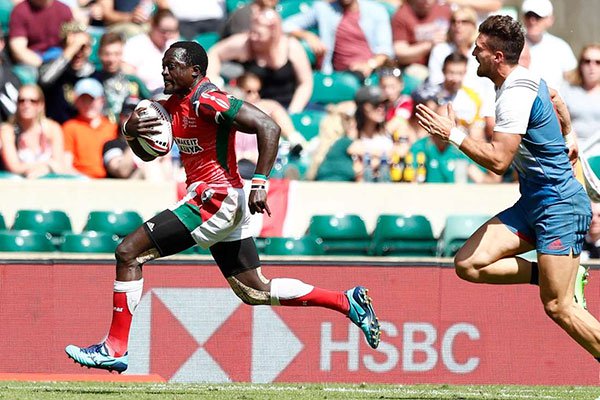 Kenya Sevens edged out Wales 33-19 to lift the Challenge Trophy during the London Sevens at Twickenham Stadium, England on Sunday.

The feat saw Kenya collected eight points to stretch their total to 101 as they surpassed the 100 points mark for the first time ever.

However, the results saw Kenya drop one place to seventh since England, who are placed seventh with 88 points, were to battle Ireland for bronze will overtake them.

The Britons are guaranteed ether 15 points or 17, hence beating Kenya to sixth place with 103 if they lose to Ireland or 105 with victory.

“We didn’t start well yesterday but I am happy in terms of the results but we still have a lot to do with performances,” said Kenya Sevens head coach Innocent “Namcos” Simiyu.

“I am happy we surpassed 100 points for the first time but our other target this season was to win one of the legs.

Former captain Andrew Amonde said they started slowly but managed to build up as the tournament progressed.

“We got something out of this tournament. The pick-up has been good and the boys are playing really well,” said Amonde.

Jeffrey Oluoch scored a brace of tries for Kenya with Collins Injera, William Ambaka and Eden Agero managing a try apiece. Agero made three conversions, while Injera one.

Afon Bagshow, Luke Morgan and Jared Rosser scored a try each for Wales.

Bagshaw’s opening try sparked Kenya into assault when Amonde broke before offloading from a tackle to Ambaka to score his sixth try in London and level for 7-7.

Ambaka went on the attack to swing it wide for Oluoch to score, but Morgan beat two defenders to land and level again 14-14.

Agero would collect the kick-off calmly and work the ball wide as Injera, Billy “The Kid” Odhiambo and Ambaka took to some explosive exchange, before Injera finished it off with his eighth try in London for his tally of 268 series for the Series as Kenya led 21-14 at the break.

Agero finished off his lovely exchange with Herman Humwa to stretch the lead to 26-14, before Rosser’s strike reduced the deficit to 24-19.

Kenya went for a high quality game finish when Oluoch powered through on the wing with his quick feet to go all the way to score with a wide smile.

Kenya Sevens win Challenge Trophy Kenya Sevens edged out Wales 33-19 to lift the Challenge Trophy during the London Sevens at Twickenham Stadium, England on Sunday. The feat saw Kenya collected eight points to stretch their total to 101 as they surpassed the 100 points mark for the first time ever. However, the results saw