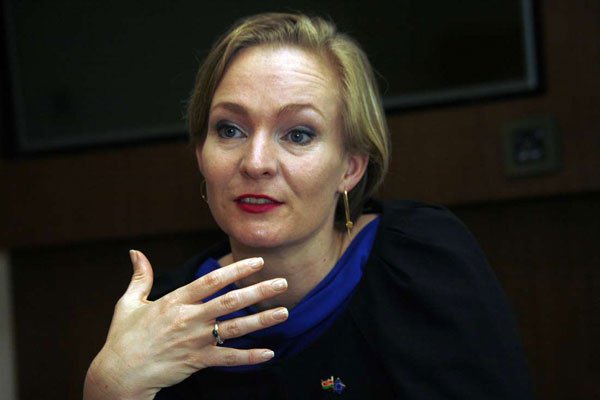 Ms Marietje Schaake, European Union’s chief observer in the August and October 2017elections who released a report on the polls at the EU parliament on January 10, 2018. Kenya has protested the release of the observer mission report without Nairobi’s input. FILE PHOTO | NATION MEDIA GROUP

Kenya on Wednesday protested the release, by the European Union, of an elections observer mission report without Nairobi’s input, calling the move unprocedural, condescending, and disdainful.

The head of the EU mission to Kenya during last year’s General Elections, Ms Marietje Schaake, released the findings Wednesday afternoon in Brussels, Belgium, and immediately attracted the ire of Kenya’s ambassador to Belgium and the EU, Mr Johnson Weru, who called the move “condescending”.

Ms Schaake explained that she would have preferred to release the report in Nairobi but the government was unwilling to receive her. And, with the deadline agreed in a June 8, 2017 memorandum of understanding between the EU and Kenya on when to release the report fast approaching, she decided to do it from a “remote” location.

But Mr Weru called Ms Schaake’s actions “unprocedural and premature”, saying it was she who had gone against the MoU between Kenya and the EU.

“Her actions are disdainful and condescending, and offend the multilateral understanding under Article 8 and 96 of the Cotonou Partnership Agreement between EU and 79 countries,” he said in a statement.

The report, among others, faults Jubilee’s use of state resources to campaign, intimidation of judicial officers after the annulling of the August 8 presidential election results, violent acts by opposition supporters against election officials, and the long time it takes to prosecute electoral offences.

Ms Schaake had, in an EU parliament webcast, said “this is one of the very few times” that a presentation of an EU election observation mission final report was taking place in the European parliament “instead of the country where we observed”.

She noted that her team was “entirely prepared” to come to Nairobi this week for presentation of the 75-page final report and the recommendations, but there was a hurdle.

“We’ve understood that the Kenyan Government is not prepared to receive us within the terms foreseen in the memorandum of understanding signed between the EU and Kenya; because that specifies that we will present our final report within three months of the Election Day,” she said.

Speaking with the Nation later, she said: “I cannot speak for the government of Kenya, but it was made very clear they were not prepared to receive us at this time.” And, in an interview with the Financial Times, she said Kenyan officials wanted the release postponed.

“I can only speculate, but they’ve said before they were not happy with what we’ve had to say,” Ms Schaake told the publication.

But Mr Weru, in a statement, said Kenya was in constant consultation with Ms Schaake’s team and was, in fact, supposed to hold a meeting Wednesday “which has been rendered nugatory by this action”.

The EU mission had also planned a meeting with Nasa on January 12 and it now remains unclear whether it will happen.

“The Government of Kenya has, through diplomatic channels, been in consultation with the EU-EOM (Election Observation Mission) on scheduling for the release of the report in Kenya in line with the stipulations of the MoU,” he said. “In the latest communication of January 6, 2018, the EU-EOM had confirmed its agreement to scheduling the visit for between mid-February and mid-March 2018.”

“It is my belief that the EU, with its strong desire to be a key actor in sustaining a rule-based international order, cannot afford to have its agreements with partner states like Kenya flouted with such cynical ease,” he wrote.

“We regret this political grandstanding as it has broken the aims and procedures of the EU-OEM, well-captured in its MoU with the Government of Kenya. We further regret (Ms Schaake’s) personalisation of the mission, including her addressing a letter to the Kenyan Government, on her personal stationery in her own personal capacity, and note that this action is an escalation of a political position she took during the process when she should have, in fact, been a neutral actor.”

The final report, uploaded on the EU website after Ms Schaake’s address, has 29 recommendations which the observers say Kenya has to implement if it has to improve its election procedures.

They include strengthening independent institutions, promoting democracy within political parties, and developing the Kenya Broadcasting Corporation into a “genuine public service broadcaster with full editorial and financial independence”.

The observers question a long-held requirement that people aspiring to be leaders need not be bankrupt. They also wonder why there are educational requirements for vying.

The EU also accuses Jubilee of using its incumbency to abuse state resources. “However,” it adds, “the advantages of incumbency at county level were evidently to the benefit of both political camps. During the 141 rallies watched by observers, 27 instances of misuse of state resources in 16 counties were witnessed.

“These included 18 instances involving Jubilee and four involving Nasa. This primarily concerned the use of official county and national government vehicles to and from campaign events, including one military helicopter in Makueni County.”

To prevent this, they recommend enforcement of the ban on using public resources to campaign, “including removing the exemption for Cabinet secretaries and members of county executive committees”.

The observers’ general take is that the repeat presidential election was much improved than the first one, with greater standardisation of results forms, enhanced transparency through the projection of tallying at constituency centres, and extensive electronic transmission and display of results forms.

The team also notes that the opposition and its supporters assaulted and intimidated polling staff, attacked IEBC offices, and disrupted electoral preparations.”

The team also wants timelines for prosecuting electoral offences shortened and a ceiling placed on how long disputes from nominations should last.

It also accuses Jubilee leaders of “harsh rhetoric against the Judiciary” and “intimidation of civil society”, both of which were “not consistent with international commitments and good practice for democratic functioning”.

Share thisFacebookTwitterPinterestEmailWhatsAppMs Marietje Schaake, European Union’s chief observer in the August and October 2017elections who released a report on the polls at the EU parliament on January 10, 2018. Kenya has protested the release of the observer mission report without Nairobi’s input. FILE PHOTO | NATION MEDIA GROUP   Kenya protests EU’s ‘disdainful’ release of elections