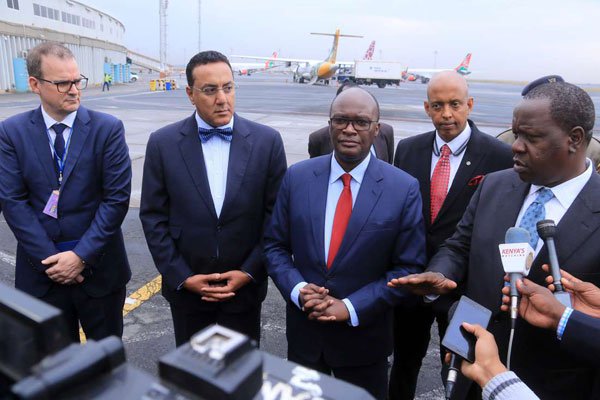 Operations at Jomo Kenyatta International Airport will over the next 100 days undergo major changes as Kenya gears up for roll-out of direct flights to the United States.

Mr Macharia said changes would create harmony among workers at JKIA so they can deliver service at international standard after the airport’s status was upgraded to pave way for direct flights to America starting this October.

“We want to ensure all agencies at the airport work together. JKIA is a key hub in the region and we should therefore meet the expectations of the international community.”

“We shall improve on where there are gaps. We shall ensure agencies work together,” he said.

Dr Matiang’i said the changes would improve efficiency in handling travellers and create order at the airport.

New regulations will be put in place to control taxi and tour firm operators at the airport. Those who fail to comply will be kicked out.

Public servants working for various agencies at the airport including police, Kenya Revenue Authority and Immigration, will also undergo mandatory training on customer care. More service desks will be placed at the airport to handle increased number of travellers.

“I’m very impressed by the work of Kenya Airports Authority and the police but there is room for improvement. We must make tough decisions to ensure there is maximum order at the airport,” said Dr Matiang’i.

He added: “But we need to improve efficiency at immigration because of the many complaints we received in December as a result of increased number of travellers. This is the front desk for the country.”

Immigration officials had suggested recruiting interns during high seasons but the CS said in the meantime, they should use National Youth Service (NYS) personnel.

The tour was planned for the early morning because it is when the airport is busiest.

“Within 100 days we shall disrupt whatever is not in order. We have appointed Utalii College to train all public servants here on customer care so that travellers are treated well from the moment they arrive, until they leave,” said Mr Balala.

The government is keen to improve services at JKIA after the facility was granted Category One status, allowing direct flights to and from the US.

FAA inspectors gave JKIA a clean bill of health after an audit, which included evaluation of security.

Kenya Airways is now set to commence daily flights between Nairobi and New York in October, marking a milestone for the national carrier. The move will cut the flight time between the two cities by more than seven hours.

Travellers will from Thursday be able to make advance booking for the maiden flight to the John F. Kennedy International Airport (JFK) in New York.

Kenya Airways has already secured a landing slot at JFK.

The trans-Atlantic flight is scheduled to depart JKIA at 10:30pm every day, a journey that will last 15 hours.

This is a reduction from the current flight time of over 22 hours, including lengthy layovers.

Travellers to JFK will arrive there at 6.30am, while the return flight from JKF will depart at 1.30pm and arrive in Nairobi at 10.30am the next day.

Each trip will have a maximum of 234 passengers — 204 in economy and the rest in business class of the national carrier’s Dreamliner aircraft.

State rolls out changes as JKIA readies for flights to New York Reviewed by samrack on January 10, 2018 .