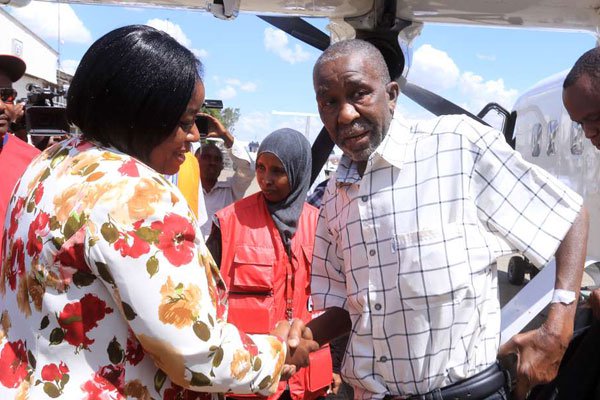 Foreign Affairs Cabinet Secretary Monica Juma (left) receives Captain Pius Frank Njoroge and his co-pilot Kennedy Shamalla (not in the frame) at Wilson Airport, Nairobi, on February 20, 2018. They were freed after being detained by rebels in South Sudan. Parts of the country are considered unsafe. PHOTO | JEFF ANGOTE | NATION MEDIA GROUP

Kenya has warned its citizens living or working in South Sudan not to visit certain areas as their security is not guaranteed.

The Ministry of Foreign Affairs and International Trade said the travel advisory applies to parts of the Greater Upper Nile region, the oil-rich region that has been a battlefield for several years between government forces and rebels allied to the Sudan People’s Liberation Army-In Opposition (SPLA-IO).

Bieh, Latjoor, Akobo, Jonglei, Northern Liech states, parts of Maiwut, Eastern Nile and Boma states and Yei River State were singled out as conflict-prone areas, which should be avoided.

The travel advisory comes a day after two Kenyan pilots captured by Akobo local authorities under the SPLA-IO were released after paying a Sh11 million ransom.

PILOTS CAPTURED
Consequently, all Kenyans living in South Sudan were asked to register at the country’s embassy in Juba or through an e-mail given as kembaju@gmail.com.

“The Ministry of Foreign Affairs and International Trade of the Republic of Kenya wishes to advise all Kenyan nationals living or travelling to South Sudan to move away from and avoid travelling to areas where armed conflicts and inter-ethnic violence have occurred within the last six months,” the statement said.

Foreign Affairs Cabinet Secretary Monica Juma on Tuesday protested the capture of the two Kenyans by authorities in South Sudan.

“The Government of Kenya deplores the unfriendly and inhumane response of the SPLM-IO to what was an unfortunate accident. We condemn the capture of our pilots,” she said.

PEACE DEAL
The ministry asked Kenyans in other parts of South Sudan to “exercise extreme caution” in their daily activities.

Incessant conflict and instability in South Sudan has been a major challenge to Kenya given the number of its citizens working and living there.

The negotiation and eventual signing of the Comprehensive Peace Agreement in Naivasha between then rebel Sudan People’s Liberation Movement (SPLM) and the Government of Sudan in 2005 was led by Kenya.

Consequently, this paved the way for a government of national unity and set the timetable for a referendum that created the independent state of South Sudan in 2011.

Kenya continues to bear the brunt of the conflicts in South Sudan, especially in 2013 after the fallout between President Salva Kiir and First Vice-President Riek Machar despite many attempts to reconcile the factions.

Mr Guterres asked Intergovernmental Authority on Development, which is spearheading the South Sudan peace process and of which Kenya is a member, not to give up.

At the same time, Kenya’s Permanent Representative to the UN Mission in New York Macharia Kamau has declared that no citizen of Kenya will be taken advantage of by any country if he is picked to become the Principal Secretary in the Ministry of Foreign Affairs and International Trade.

Mr Kamau regretted that it has become fashionable for neighbouring countries to humiliate Kenyans residing in their countries and said this will be a thing of the past if he is appointed to serve, declaring that no Kenyan should be subjected to this.

“We have to draw a line in the sand as a country: That no Kenyan should be subjected to this kind of harassment, especially if it is by a neighbour,” Mr Kamau said when he appeared before the committee on Defence and Foreign Relations of the National Assembly for vetting.

The nominee was responding to questions on the capture of the pilots.

“We host many refugees from South Sudan and we treat them as Kenyans and the least we expect from our neighbour is quid pro quo,” Mr Kamau told the committee chaired by Kajiado South MP Metito ole Katoo.

Share thisFacebookTwitterPinterestEmailWhatsAppForeign Affairs Cabinet Secretary Monica Juma (left) receives Captain Pius Frank Njoroge and his co-pilot Kennedy Shamalla (not in the frame) at Wilson Airport, Nairobi, on February 20, 2018. They were freed after being detained by rebels in South Sudan. Parts of the country are considered unsafe. PHOTO | JEFF ANGOTE | NATION MEDIA