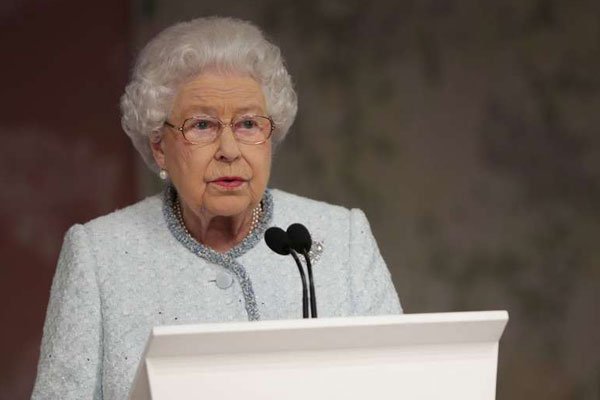 Britain’s Queen Elizabeth II speaks prior to presenting the inaugural Queen Elizabeth II Award for British Design to British fashion designer Richard Quinn during her visit to London Fashion Week in central London on February 20, 2018. She was once a target of an assassination conspiracy. PHOTO | YUI MOK | AFP

The Kenyan intelligence service has been hailed in the United Kingdom for thwarting a terror plan to assassinate Queen Elizabeth II and former Prime Minister David Cameron.

Details of the plot emerged on Tuesday during the hearing of a case involving London delivery driver Aweys Shikhey, who was interested in joining terror group Islamic State of Iraq and the Levant, a Jihadist movement in Iraq and Syria influenced by the Wahhabi doctrine.

During the hearing, Prosecutor Barnaby Jameson told the court that Shikhey was not on the UK intelligence radar until Kenyan authorities encrypted his chat messages on Threema and Telegram with a fellow Somalia national living in Kenya, named Abdirahman Idrissa Hassan, which revealed a discussion of the attacks.

Hassan was arrested in Kenya for terrorist offences on September 2016.

Mr Shikhey, 38, and a Dutch national who lives in north London, was found guilty of attempting to join the terror group.

He was arrested on May 23 last year at Stansted Airport by counterterrorism officers as he prepared to board a flight to Turkey en route to Syria.

He was found in possession of a number of mobile phones and had taken a selfie at the airport to disguise himself as a tourist as advised in one of the conversations found on the Kenyan friend’s laptop seized in Kenya.

Originally from Somalia, Shikhey, who has two wives — one in Kenya and the other in Netherlands — is said to have led a double life and dreamed of travelling to take part in a violent jihad after moving to Tottenham, north London.

Mr Jameson detailed a series of messages between Shikhey and Hassan in which the former PM and the Queen were identified as targets.

AMMUNITION
Mr Jameson read some of the messages from the laptop where “Hassan says to the defendant: ‘May God bestow you in killing David Cameron and the old woman Elizabeth.”‘

“At the end of the conversation, the defendant says, ‘Amen brother’. That exchange perhaps gives you some insight into the mindset of those two individuals.”

Continuing the conversation, Hassan enquires: “I want to ask you… can you buy bullets in the UK?”

SPURS MATCH
Shikhey replies, suggesting they can only be smuggled.

“Three or five people are needed who are connected to each other, who can carry out a bloody attack,” he adds.

Shikhey said it would be better if an AK-47, M16 and BKM can be found — all references to automatic weapons — which they would then take to Stamford Hill as football fans left a Spurs match.

Detectives found that in the weeks leading to his planned flight, Shikhey started looking at how to raise considerable amounts of money by making numerous applications for a number of loans.

Most of his loan applications were unsuccessful although he managed to secure £10,000 (Sh1.4 million) from Barclays “ostensibly for a wedding”.

NEW MARRIAGE
It was also revealed that the would-be jihadist went ahead and borrowed more money from his boss after telling him he needed to visit his two wives and children in Holland and Kenya.

In the months leading up to his arrest, Shikhey had been messaging Raaqiya Hussein, a Somalia national living in Norway and an “avid supporter” of Islamic State who is also awaiting trial for terror offences.

Shikhey admitted he wanted to marry Hussein and live in a country under Sharia law, but insisted he had “no interest” in fighting for the Islamic State.

Earlier during the hearing, Mr Jameson described the suspect as a quiet, hardworking, religious man employed by the delivery firm Dynamic Parcel Distribution.

He however added that there was “an extremist agenda going on behind the scenes” as the face the defendant presented to the world “was different to his real face”.

“That is, a terrorist hiding in plain sight,” Mr Jameson said.

“Thanks to the information we received from the Kenyan authorities and the good work here by my detectives thereafter, we have been able to uncover his attempts and stop him from joining Daesh and committing terrorist acts over there.” Isis is also referred to as Daesh.

Shikhey was remanded in custody and is due to be sentenced on March 15.

Britain’s Queen Elizabeth II speaks prior to presenting the inaugural Queen Elizabeth II Award for British Design to British fashion designer Richard Quinn during her visit to London Fashion Week in central London on February 20, 2018. She was once a target of an assassination conspiracy. PHOTO | YUI MOK | AFP  How Kenya police