Kenya’s President Uhuru Kenyatta, nearing the end of his second term amid an economic downturn and political shifts, announced a raft of changes in a televised address on 14 January, of which the “primary thrust…was economic.”

The East African nation with a population of 47 million began the 2020s facing a multitude of challenges, many of its own making over the last decade, and others due to regional and international events.

The main challenge is Kenya’s economy which has slowed significantly despite — some might argue because of — massive investments in infrastructure development.

In his address, televised from his official residence in the coastal city of Mombasa, Kenyatta outlined a plan to shift gears, reshuffle his cabinet, get rid of several non-performing Cabinet Secretaries, and address specific economic and political issues.

“I want the economy to be more important focus than politics,” Kenyatta said at the beginning of his address. [Read the full speech.]

Kenyatta said the country’s two-tier governments had paid 70% of outstanding bills to suppliers and contractors in the last two months, and that infrastructure bills would be paid in early 2020, in time for an infrastructure bond of Shs 150 billion.

The plan, he said, is to increase the circulation of money in the struggling economy.

Last November, Kenyatta expended significant political capital to push the country’s legislature to remove a 2016 interest rate cap. “The removal of the interest rate cap in November last year will facilitate the availability of more credit to businesses which will, in turn, increase the circulation of money,” he said in his speech.

While Kenyatta made his address from Mombasa, he left out how he plans to revive the coastal city’s economy, devastated by his primary infrastructure project, the Standard Gauge Railway.

Also missing were any tax breaks for the country’s struggling businesses. With looming debt repayments, a ballooning wage bill, and revenue target misses, the country has doubled down on tax collection, which will undoubtedly affect measures to improve the business climate.

Another significant gap was transparency in the government’s deals.

While asking Kenyans to hold him and other leaders accountable for their promises, Kenyatta did not address his promise to share publicly the SGR contract between Kenya and the Chinese. The opaqueness and secrecy of such deals, pundits argue, presents a potential danger to the country’s economic prospects in the short term and the long term, especially as the infrastructure loans become due.

The day the locusts came

To fix agriculture, one of Kenya’s primary economic pillars and source of wage employment, President Kenyatta fired his Cabinet Secretary, and set out a plan to get rid of cartels in the coffee and tea sectors.

Kenyatta replaced CS Mwangi Kiunjuri with Peter Munya, a former county governor who says he is “on leave” from politics.

As part of his reform of the key coffee and tea sectors, which have faced multiple challenges that have left farmers broke, Kenyatta said he would restructure the tea body, and that “no one who is not a registered tea grower is allowed to sell it”. He also set out new rules to boost value-addition to increase the country’s income from its exports.

Kenyatta also imposed a “16% VAT on milk products that have originated from outside the EAC” in a bid to stem the “incursion of powdered milk which is smuggled into Kenya from outside our Eastern Africa Region”.

He also promised to invest in the government’s creamery so it can “purchase excess milk from farmers to convert it into powder milk for future use”.

Why this will be a challenge

Kenyatta also directed the country’s intelligence service to investigate and identify cartels and hand the information to investigators and prosecutors. It is unlikely, however, that anything short of radical changes to the coffee and tea sectors will revitalise the agricultural sector.

On the milk sector, Moses Kuria, the legislator of Kenyatta’s home constituency, responded, “The only problem is Lato Milk, which comes from Uganda and Kenyan milk processors who moved to Uganda due to the low cost of production, process the milk, and re-export it to Kenya.”

Milk is particularly controversial for Kenyatta, because the Kenyatta family is heavily invested in the sector and runs the biggest milk processor in the country.

Also missing is how the Kenyatta administration plans to bring down the cost of food. For example, on the same day as his televised address, the country’s energy regulator announced an increase in the price of fuel.

In late 2018, the IMF arm-twisted Kenyatta into introducing a new tax on fuel products, which, combined with the US-Iran conflict, will most likely lead to even higher fuel prices.

Taking into account the weighted average cost of imported refined petroleum products, the changes in the maximum allowed petroleum pump prices in Nairobi are as follows: Super Petrol, Diesel and Kerosene increases by KShs.0.70, KShs.0.54, and KShs.1.64 per litre respectively. ^DC 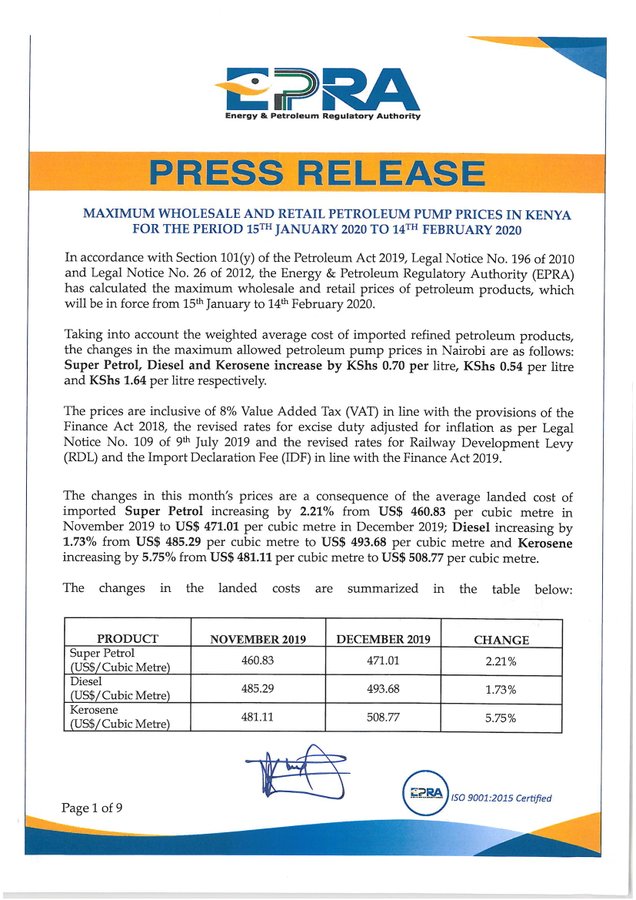 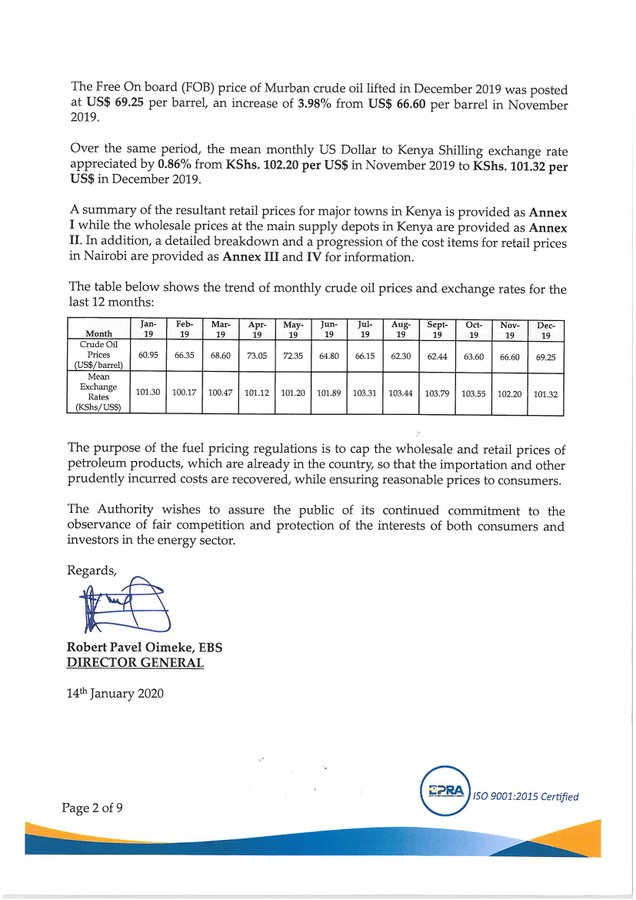 15 people are talking about this

The price of fuel is directly linked to the cost of food, and a new tax on petroleum products

In a bid to ease complaints about how royalties for creative works were paid, Kenyatta said digital platforms run by private companies would be eliminated because they sit “outside the collection management organisations,” and payments of royalties would be managed centrally.

Kenyatta also addressed his war on corruption, which has seen many senior and former Kenyan politicians prosecuted for economic crimes. He called on the Judiciary, whose head complained about being forced into impractical austerity just a few months ago, to support him in the fight, saying his efforts had led to deterrence.

Despite more than five terror attacks by Somali militant group Al Shabaab on Kenyan soil, including one on a critical US base in the country, Kenyatta did not address the country’s security.

The attacks have frozen education in some parts of Northern Kenya, as the militant group targets teachers and other professionals, in addition to targeting communication masts and security forces.

Is a referendum on the way?

“It is time for a new consensus,” Kenyatta said during his address.

His former rival, and now primary political partner, Raila Odinga, has been traversing the country, campaigning for a referendum before the end of the year. Kenyatta’s deputy, William Ruto, and his allies have voiced their opposition to the referendum and the Building Bridges Initiative (BBI), a direct result of Kenyatta and Odinga’s detente in early 2018.

“It appears it is more and more Raila and Uhuru in one camp and the deputy president struggling to fit in,” a Nairobi-based academic told Reuters.

After ascending to power together, the relationship between Kenyatta and his deputy is now all but dead. With a ruling party in shambles, and Kenyatta and Odinga now close allies, a referendum could provide Ruto with a way out.

It would be a repeat of the last such exercise in 2010, where he led the primary opposition against the new constitution.

While Kenyatta and Odinga move forward on the BBI, despite Ruto’s opposition, the deputy president’s allies have become the country’s informal opposition.

Kenyan political exile and Odinga’s friend-then-foe then foe-then-friend, Miguna Miguna, has received support for his predicament from what would have been, just two years ago, unlikely quarters.

Kenyatta’s administration has not achieved much of what it set out to do, however, the dynamics are different now the economy is spiralling out of control. It is likely he will push for reforms and expend as much political capital as he needs to — he is almost done with his second term — but his rift with Deputy President Ruto may slow him down.

In his speech, Kenyatta made as many significant promises and changes as he left out.

He made similar attempts in the past, as an editorial in the country’s oldest newspaper noted on the day after the speech, “it is easy to excuse the feeling of cynicism; that he is doing too little, too late”.

Karagita estate: A hotbed of crime in Naivasha

Karagita estate: A hotbed of crime in Naivasha