Kenya has the largest number of jobless youth in East Africa 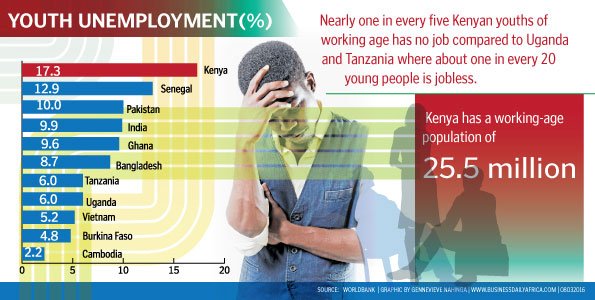 Kenya has the largest number of jobless youth in East Africa

Kenya, East Africa’s biggest economy, holds the dubious distinction of being the country with the largest number of unemployed youth in the region, a new World Bank report says.

The report, officially released Tuesday, says Kenya’s rate of unemployment — now standing at three times that of the neighbouring Uganda and Tanzania — is also among the highest in the world.

The report says that nearly one in every five Kenyan youths of working age has no job compared to Uganda and Tanzania where about one in every 20 young people is jobless, underlining the harsh economic reality that Kenyan youths are facing.

Unemployment among Kenya’s youth is now estimated to stand at 17.3 per cent compared to six per cent for both Uganda and Tanzania.

Mass joblessness, especially among the sprightly and innovative youth, is a drag on the economy because it forces unemployed adults to depend on the small working class, stretches family resources and consumes savings for future investments.

The World Bank report says mass unemployment continues to deny Kenya the opportunity to put its growing labour force to productive use, thereby “denying the economy the demographic dividend from majority young population”.

World Bank economists says the problem is mainly compounded by the fact that Kenya’s ability to create new jobs has lagged behind population growth, resulting in narrow formal opportunities, especially for entry-level workers fresh from college.

Kenya has a working-age population of 25.5 million, or over half the country’s population and the number is projected to swell to 39.2 million in the next 14 years when the country hopes to have transformed into an industrialised middle-income economy.

World Bank lead economist for Kenya Apurva Sanghi said that aside from the government providing a conducive business climate for private companies to thrive and create jobs, Kenya must funnel more resources towards developing its human capital to boost productivity.

“There is need to step up the quality of education to align it with market needs and to keep the growth engine running, driven by innovation,” said Mr Sanghi.

The report identifies human productivity as a long-term growth driver alongside urbanisation and proper management of oil cash that is expected once Kenya starts exploiting the Turkana oilfields.

Kenya’s public schools have remained rickety for years, weakened by acute lack of teachers who have in the past staged frequent strikes to push for higher pay.

This has seen learners in public schools trail their counterparts in private institutions whose higher fees lock out many households.

Kenya has the largest number of jobless youth in East Africa Reviewed by samrack on March 9, 2016 .