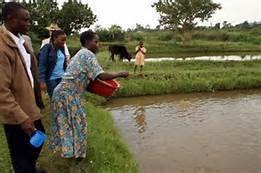 Murang’a — Samuel Kinuthia knows how to make the most of technology. Using a technique called basin terracing, he has boosted his income at his farm in Murang’a county, and helped provide Kenyans as far away as Nairobi with better access to clean drinking water.

Kinuthia and a group of 300 farmers in Kiaruta village are turning hilly land into more productive farmland through basin terracing. It also reduces soil erosion, which can choke central Kenya’s rivers and pollute drinking water.

On a sunny morning, Kinuthia and two employees are preparing a fresh strip of land to sow crops on his three-acre farm.

First they dig across a hilly patch to make it into a flat terrace. They then dig square holes to form basins on the strip, where Kinuthia will plant vegetables.

“I used to plant maize and beans but I could not harvest much,” he said. “With basin terracing, I can plant fresh produce like tomatoes, kale and onions. Both the harvest and the resulting income improve because there is a ready market.”

Fred Kihara, water fund manager in Kenya for The Nature Conservancy (TNC), an international environmental organisation, explained that the technology reduces the amount of soil being eroded away into rivers.

In Nairobi alone, 85 percent of water – or 70 million cubic metres – is supplied by the dam, around 80 kilometres away, according to officials from the Nairobi City Water and Sewerage Company. More sediment turns the water cloudy, they say.

Soil runoff can include manure and fertiliser used on farms, which may pollute drinking water and make people sick, said Philip Muthui, the company’s production manager.

He hopes that the use of basin terracing by farmers will reduce erosion into rivers, thus protecting Ndakaini water.

Currently, the cost of removing the sediment and treating water at Ndakaini ranges between six and seven Kenyan shillings ($0.06-$0.07) per cubic metre, which Muthui says is too high.

“Reducing sediment load into rivers has cut the cost of treating water by about three percent,” he added.

Efforts to reduce erosion in the Upper Tana basin have been supported by the Nairobi Water Fund, a $10 million public-private partnership between TNC, the Nairobi City Water and Sewerage Company and the Kenyan government, among others.

Kenya: Farm Technology Helps Clean Up Nairobi’s Drinking Water By David Njagi Murang’a — Samuel Kinuthia knows how to make the most of technology. Using a technique called basin terracing, he has boosted his income at his farm in Murang’a county, and helped provide Kenyans as far away as Nairobi with better access to clean