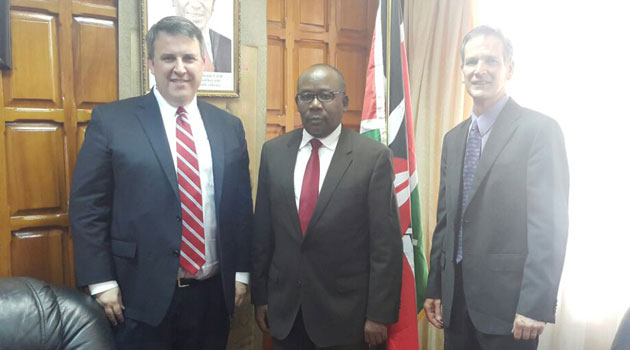 By KENNEDY KANGETHE, NAIROBI, Kenya, Apr 16 – The United States of America (USA) has pledged Mutual Legal Assistance to the Government of Kenya in its efforts to combat corruption and transnational crime.

The support constitutes part of the various reform programs aimed at strengthening the government’s anti-corruption strategies being undertaken by the Office of the Attorney General and Department of Justice.

Critical areas to be supported include the establishment and operationalization of the Assets Recovery Agency as well as cooperation in pursuing criminal matters under the two governments’ jurisdictions.

The support was pledged to the Government of Kenya by the Associate Director in charge of the Criminal Division of the USA Department of Justice, Jeffery Olson when he paid a courtesy call to the Attorney General, Professor Githu Muigai at his chambers on Friday.

The discussions held at the Attorney General’s Chambers centred on the progress made by Kenya since the enactment of the Mutual Legal Assistance Act of 2011.

Olson also confirmed that the American government was keen on supporting Kenya in its efforts to operationalize the recently established Asset Recovery Agency.

Discussions between USA and Kenya on Mutual Legal Assistance have been going on for the last two days with the technical teams from both governments trying to understand the processes, laws and challenges presented by the various statutes of the two countries.

The two teams also looked at the various channels of cooperation with the aim of initiating a target program of consultation to improve on the Mutual Legal Assistance.

The Mutual Legal Assistance Act 2011 which came into effect on December 2, 2011 provides for legal assistance to be given and received by the Government of Kenya from foreign countries and partners in relations to investigations, prosecutions and judicial proceedings on criminal matters.

The Act allows for the creation of a Central Authority through the legal advisors of the member states that reduces the bureaucratic channels of diplomacy in addressing the criminal matters.

The Act further allows for the identification and confiscation of properties obtained either directly or indirectly from criminal activities in different states.

US pledges mutual legal assistance to Kenya Reviewed by samrack on April 16, 2016 .

Share thisFacebookTwitterPinterestEmailWhatsAppThe support constitutes part of the various reform programs aimed at strengthening the government’s anti-corruption strategies being undertaken by the Office of the Attorney General and Department of Justice/CFM NEWS US pledges mutual legal assistance to Kenya By KENNEDY KANGETHE, NAIROBI, Kenya, Apr 16 – The United States of America (USA) has pledged Mutual Legal Assistance