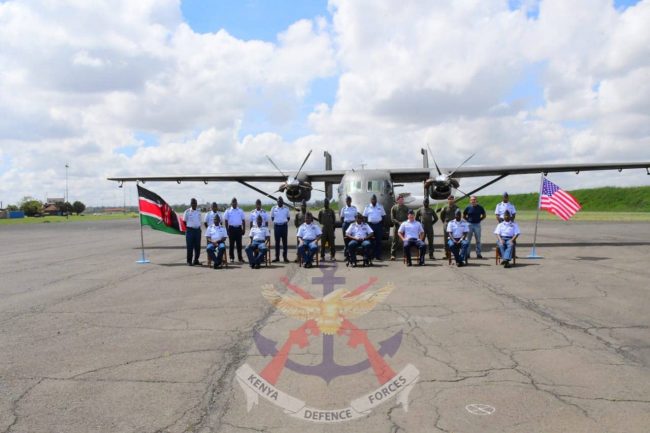 The C-145 Skytruck which is intended to phase out the Y-12 aircraft was acquired through Excess Defence Article(EDA) after the signing of the Kenya United States Liason Office (KUSLO) agreement by the two Governments on  April 4, 2017.

The plane is one of the 16 used by Air Force Special Operations Command (AFSOC) in the US as of 2015, which were offered to US allies after being retired from service.

The Estonian Air Force received the first of two C-145 skytrucks in 2019, while Kenya accepted six aircraft. Costa Rica and Nepal will receive two aircraft each.

“It is a great day today as we introduce the C-145 Skytruck Aircraft(KAF 2001). This aircraft will not be in the Service for display but to enhance the capability of our air support to our sister Services,” said KAF Commander Major General Francis Ogolla.

C-145 Skytruck Aircraft, with a capacity of 19,  is a variant M28 manufactured by Polskie Zaklady Lotnicze (PZL) Mielec, a Sikorsky company based in Poland.

“The C-145 is more modified with a stronger engine, it has a short take-off and landing capability, picks height faster and has a bigger cargo capacity,” said the Kenya Defence Forces (KDF) in a statement.

The US Defence Air Attachee to Kenya Major Matthew Yan assured Kenya of continued support from the US Government.