In the exposé dubbed “Guns Galore” aired on Sunday night, the station exposed how rogue men in uniform allegedly hire out their guns, uniforms, bulletproof vests, and handcuffs to criminals for as low as Ksh1,000.

But addressing members of the press at the DCI headquarters on Kiambu Road in Nairobi, the DCI boss denied that guns acquired by the Citizen TV crew led by investigative reporter Purity Mwambia were leased out by policemen.

He termed the report as malicious and one aimed at depicting the National Police Service in a bad light. 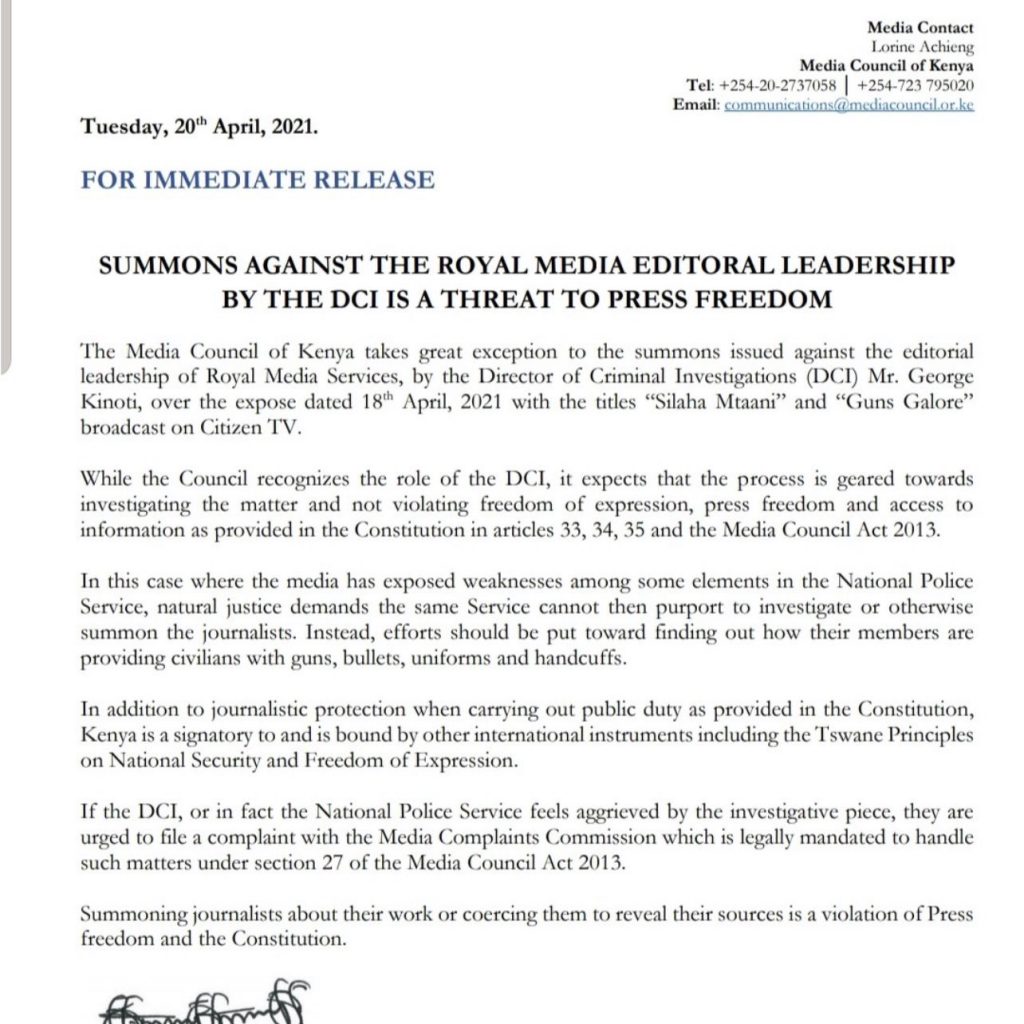 “The allegations are extremely serious. We shall be asking the editorial director, and other relevant reporters to come and give us more insights to this report in pursuit of criminals harboring the weapons,” said Kinoti.

“The report seemed to be a malicious attempt to discredit the National Police Service; we can only conclude that it was aimed at creating public pandemonium over the management of the security sector.”

But in a statement issued on Tuesday night, MCK Chief Executive Officer David Omwoyo said the summons issued against the editorial bosses violates freedom of the press.

“While the Council recognizes the role of the DCI, it expects that the process is geared towards investigating the matter and not violating freedom of expression, press freedom and access to information as provided in the Constitution in articles 33, 34, 35 and the Media Council Act 2013,” the CEO said.

“In this case where the media has exposed weaknesses among some elements in the National Police Service, natural justice demands the same Service cannot then purport to investigate or otherwise summon the journalists. Instead, efforts should be put toward finding out how their members are providing civilians with guns, bullets, uniforms and handcuffs.”

If the DCI is aggrieved, Omwoyo said, the police bosses should file a formal complaint with the Media Complaints Commission which is legally mandated to handle such matters under section 27 of the Media Council Act 2013.

“In addition to journalistic protection when carrying out public duty as provided in the Constitution, Kenya is a signatory to and is bound by other international instruments including the Tswane Principles on National Security and Freedom of Expression,” he added.

“Summoning journalists about their work or coercing them to reveal their sources is a violation of Press freedom and the Constitution.”

MCK is an independent national institution established by the Media Act, 2013 as the leading institution in the regulation of media and in the conduct and discipline of journalists in Kenya.