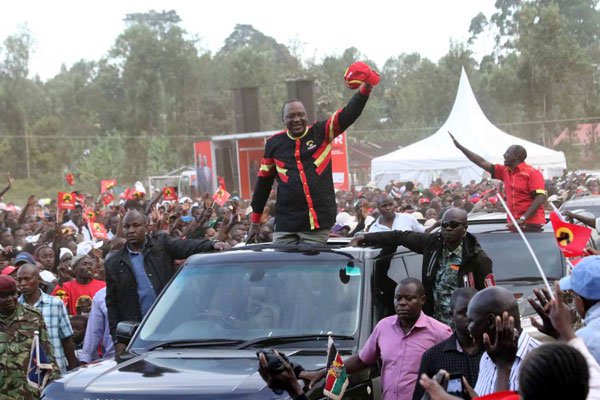 President Uhuru Kenyatta and his deputy William Ruto have fired a warning shot to foreign countries, accusing them of trying to interfere with Kenya’s affairs.

Speaking  during political rallies in Nyahururu and Karatina, the two said the country was not in a crisis to deserve interference by the foreign countries.

“I want to tell the international community that there is no problem in Kenya. The only problem we have is one man called Raila Odinga (Nasa leader),” said President Kenyatta.

The Head of State said the country will not allow dialogue between him and Mr Odinga spearheaded by the foreign countries.

While maintaining that Kenya was a sovereign state, he said: “We will not allow wazungu (whites) to come and tell us what to do. If they come to Kenya, let them come as tourists. Let them go to Maasai Mara, come to Laikipia and other places, but they should not come here and tell us what to do,” said President Kenyatta.

He also blamed Mr Odinga for demonstrations and destruction of property in various parts of the country, saying any person involved in protests must be dealt with accordingly. The President appealed to voters in the county to turn up in large numbers for the October 26 repeat election and cast their votes.

“He is crying before the foreign countries so that they can sympathise with him and set up a team that will oversee mediation. But even if he goes to Europe, Washington, pass through Mexico or go to Casablanca, there will be no nusu mkate,” said Mr Ruto.

The DP told Mr Odinga to call off demonstrations, stop intimidations and threats against IEBC chairman Wafula Chebukati and CEO Ezra Chiloba, and instead prepare for the elections.

“If as Jubilee we wanted to swear in Mr Kenyatta as President, we could have done so, but we never wanted to plunge the country into chaos because we are peace lovers. So we decided to go back to the ballot. Let him also call off demos, stop side shows and prepare for the election,” added the DP.

Speaking earlier in Karatina, President Kenyatta ruled out sharing power with the opposition.

The Head of State and his deputy said Mr Odinga was a protégé of western countries.

READ: Nasa reaches out to foreign powers for help

The President condemned a trip to the UK by Mr Odinga, saying the era of being ruled by Western countries is over.

He also defended police from claims of using excessive force on demonstrators who were holding anti-IEBC protests.

Mr Ruto told Mr Odinga to respect the Constitution and the people of Kenya, saying he was the one who called for a repeat of the presidential election, and he should not dictate to  Kenyans not to participate in the polls.

Responding to Mr Odinga’s statement that he brokered the 2008 coalition government, the DP said he would not allow it again because the Nasa leader “misbehaved and gave former President Mwai Kibaki a hard time”.

“I helped him get the coalition deal but he misbehaved, always complaining about issues like half a carpet. This time there will be no power-sharing deal,” Mr Ruto said. During the rally, one person was injured after a building collapsed.

Share thisFacebookTwitterPinterestEmailWhatsAppKeep off Kenyan affairs, Uhuru tells foreign powers President Uhuru Kenyatta and his deputy William Ruto have fired a warning shot to foreign countries, accusing them of trying to interfere with Kenya’s affairs. Speaking  during political rallies in Nyahururu and Karatina, the two said the country was not in a crisis to deserve interference