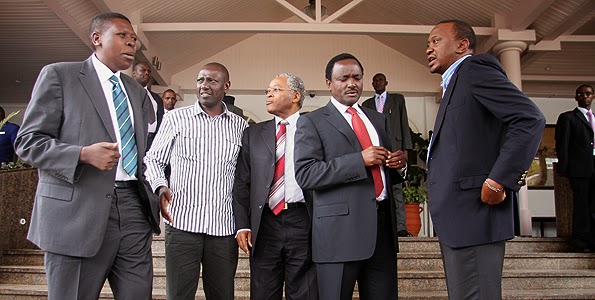 The mice, frustrated by the constant dangers posed by the cat, met in council to seek a solution to this tiring challenge. They discussed various options but didn’t reach a consensus. Eventually, a very young mouse raised up on his hind legs and proposed that a bell should be hung around the cat’s neck.

“What a splendid idea!” they said. “That is as excellent suggestion!” “This will alert us of the cat’s presence so that we can escape!” They accepted the proposal with great enthusiasm and applause, until a quiet old mouse stood up and said, “This is, indeed, a very good suggestion and will no doubt solve our problems. But now, who among us will put the bell around the cat’s neck?”

One may wonder where I am headed with this story. My message today is crafted for former Vice President Kalonzo Musyoka, who, if he does not take the bold decision to join Jubilee, will continue staying in an outfit that knows how to propose things not keeping in mind that it is something else to execute them.

If the Wiper leader is not careful, he will continue playing second fiddle to Cord boss Raila Odinga in opposition politics. As it stands today, Kalonzo is in NASA, a political outfit that has already made its decision on the flagbearer and is just not sure how to tell him.

Kalonzo must, like the quiet old mouse, stand up and ask his colleagues the hard question: How are we going to do this and what is in it for me if we fail to win and form the next government? Otherwise, he will end up playing third fiddle in the opposition.

Kalonzo joined Raila to play second fiddle in a losing coalition in 2013. He is bound to be in the same boat this time round, with the newly formed NASA likely to settle on Raila as its presidential candidate with Musalia Mudavadi as the running-mate to face President Uhuru Kenyatta and Deputy President William Ruto.

Kalonzo must rethink his options — he can choose to stay in the opposition without any definite position or negotiate with Jubilee for a prominent role.

Since he cannot get number one or two in Jubilee, he must choose to negotiate to be number three in the winning team.

It is more viable for Kalonzo to bring his supporters into the Jubilee basket and negotiate to be Speaker of the National Assembly — the number three in command, according to the Constitution. He can even go further and negotiate for several Cabinet appointments, principal secretaries and ambassadors.

Why would he agree, at age 65, to be left out in the political cold for another five years?

It’s unlikely that Kalonzo will defect on his own accord and, therefore, the people of Lower Eastern must revolt against its leader and demand that Kalonzo joins government. This is already happening and is the surest way to ensure that the Kamba vote supports Jubilee.

Five MPs from Ukambani, who were elected on the Wiper party ticket in 2013, have already decamped to Jubilee. Chances of their supporters voting for the opposition in August are slim. It is time that Kalonzo reads the mood.

Wiper’s fortunes are diminishing in Ukambani with the growth of other parties such as Maendeleo Chap Chap led by Machakos Governor Alfred Mutua. He also defected from Wiper. MCC has already declared that it will support Uhuru’s reelection.

Kalonzo’s defection will give Jubilee a landslide first round victory, which will be good for democracy and peace in this country. At the end of it, it is better to be number three in government than number three in the opposition.

Kalonzo should join JP Reviewed by samrack on February 12, 2017 .

Kalonzo should join JP The mice, frustrated by the constant dangers posed by the cat, met in council to seek a solution to this tiring challenge. They discussed various options but didn’t reach a consensus. Eventually, a very young mouse raised up on his hind legs and proposed that a bell should be hung around