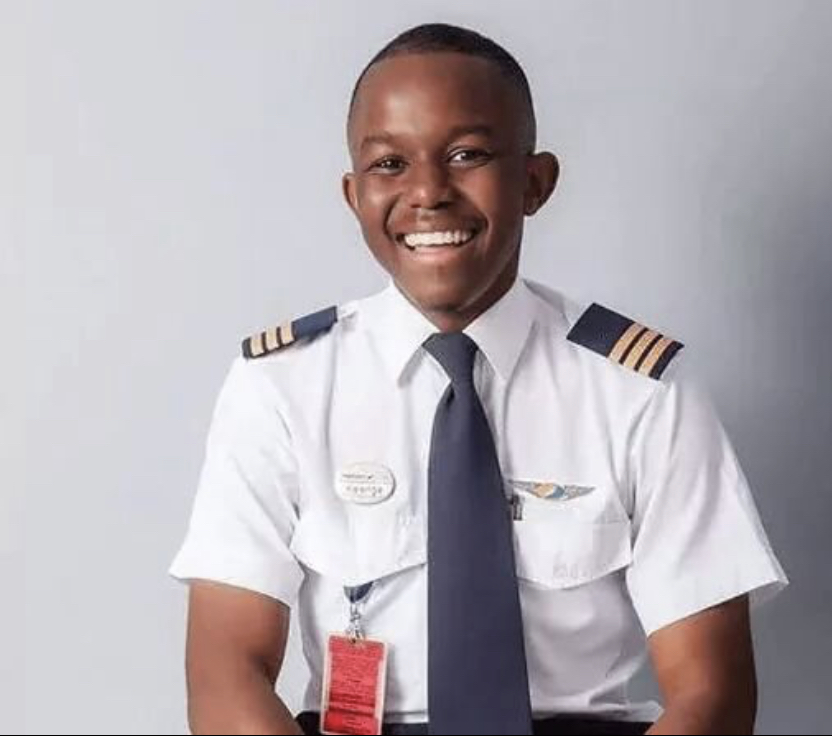 At the tender age of twenty years old, Kalenga Kamwendo has become Zambia’s youngest pilot, having been hired as part of Proflight Zambia’s commitment to supporting Zambian youth and nurturing young local talent.

Kamwendo was given the job on his 20th Birthday in August last year, and has since joined Proflight’s team of 36 pilots operating across Zambia as well as Malawi as a First Officer.

Born in Kitwe in Zambia’s Copperbelt, Kamwendo took an avid interest in the aviation industry whilst in Grade 10 or 11 at school. A strong student in English, Maths and Physics, he enrolled for Forty Three Air School in South Africa’s Eastern Cape after graduating from secondary school in 2011.

A year and three months later, he had racked up 200 hours of flying and his commercial pilot’s license in hand, despite being much younger than a number of his peers. Kamwendo has now done almost 500 hours of flying since joining Proflight Zambia.

Recalling his first day as a commercial pilot, Kamwendo says:

“I was nervous; I didn’t even have the full uniform. I was flying to Kasama and had to be up at 4am”. But that’s all in the past now. He goes on:

“There are tons of thrills, from something as simple as seeing a passenger happy, to the thrill of flying.

Kamwendo had originally planned to become an engineer like his father, but on hearing that there was a mistaken belief that Zambians could not become pilits, he was determined to set the record straight.

Today, he stands as proud testament of the potential of Zambia’s youth, and what they can achieve when given the chance. He sends a clear message to all young Zambians that the sky may not be the limit — it could be even higher.

Kalenga Kamwendo is Africa’s youngest pilot and We will prove this adage which says: “To well-born souls, value does not await the number of years”

At least that’s what one might think about the 21-year-old Zambian Kalenga Kamwendo, who is considered the youngest airline pilot in Africa.

Indeed the fate of Kalenga took a dizzying turn when he crossed the 1000 hours of flight. He has been in the air for two years, piloting for Lusaka Mfuwe Company.

A good student in class, Kalenga had very good grades in math, physics and English. This is what earned him enrollment in an aviation school in South Africa.

He obtained his professional pilot’s license after having accumulated 200 flight hours. Today more than ever Kalenga is among the African icons and is as a great role model for the youth of his country and Africa.

It is very interesting to hear news from young Africans who have taken up the challenges facing the black continent for centuries. Indeed, the label of miserable people unable to lead to any development, to any technical and scientific progress, has stuck on Africans for centuries.

With access to education after the era of slavery, many young people of African origin have demonstrated the ability of blacks to transcend the limits initially imposed on him. Through innovation, revolutionary mentalities, conscientious and hard-work, Africans, create and impact the world.

Originally from Zambia, Kalenga Kamwendo is the youngest commercial pilot in the Africa. The young flight officer passed the 1,000-hour milestone on a flight from Lusaka to Mfuwe, exactly one year and 9 months after his first flight on Zambia’s air leader.

He is not very far from his goal as he is close to the 1,500 flight hours from which he will be able to take the exam for the senior officer’s license. If luck smiles on him and Kalenga achieves another 1,000 flight hours, he can become a flight captain. It is a great pride for Africa because a new sun full of young talents ready to awaken dazed consciences is rising.

Share thisFacebookTwitterPinterestEmailWhatsAppMeet Kalengo Kamwendo, Zambia’s youngest pilot At the tender age of twenty years old, Kalenga Kamwendo has become Zambia’s youngest pilot, having been hired as part of Proflight Zambia’s commitment to supporting Zambian youth and nurturing young local talent. Kamwendo was given the job on his 20th Birthday in August last year, and has