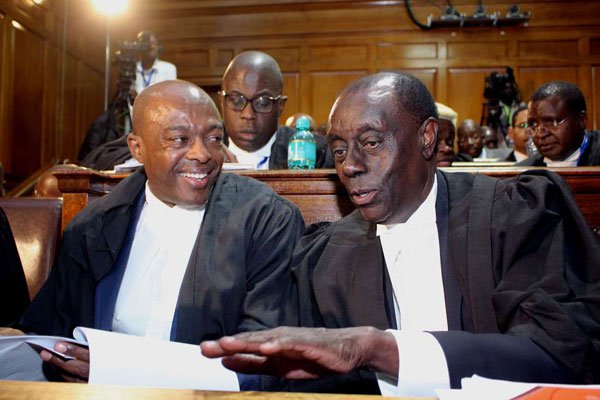 Lawyers Kamau Karori and Paul Muite at the Supreme Court Nairobi, on August 27, 2017 during the hearing of the presidential petition. Judges have set tempo for the high profile case. PHOTO | DENNIS ONSONGO | NATION MEDIA GROUP

The Supreme Court Sunday evening admitted all evidence in the presidential petition, setting the stage for a titanic battle between lawyers for President Uhuru Kenyatta and opposition leader Raila Odinga.

Perhaps stung by criticism on the manner in which the 2013 presidential petition was handled, the Supreme Court judges dismissed all applications by Mr Odinga and President Kenyatta to dismiss sections of evidence which was alleged to have been filed outside the constitutional deadlines.

The judges, led by Chief Justice David Maraga, were unanimous that the orders sought by the rival parties to the case arising out of the August 8 elections were mischievous, arguing that they would have drastic consequences to the petition, and that it was in the interest of justice to dismiss them.

However, the ruling on the National Super Alliance leader’s application for access to the Independent Electoral and Boundaries Commission (IEBC) servers will be made Monday morning before Mr Odinga’s lawyer James Orengo starts arguing his case to overturn President Kenyatta’s victory.

The judges allowed presidential candidates, Dr Ekuru Aukot and Prof Michael Wainaina, to join the case as interested parties on the basis that the outcome of the petition would affect them.

They, however, rejected attempts for the same by Nairobi lawyer Charles Kanjama, the ICT Association of Kenya, Isaac Aluochier, and Benjamin Barasa, saying the applicants did not convince the court that their admission would add any value to the case.

The Law Society of Kenya and the Attorney-General were admitted as friends of the court.

They were instructed to limit themselves to specific issues and were told to take 20 minutes each during the hearing.

Prof Githu Muigai, the Attorney-General, will argue about the effect of the Court of Appeal judgment that results declared at the polling stations are final.

This is important in this case because one of the assertions by IEBC chairman Wafula Chebukati was that his role was limited to adding up the numbers on the Forms 34B filled by the 290 Returning Officers  and not to correct any errors.

IEBC has argued that while there might have been errors in the forms from the constituencies, they were not substantial enough to affect the outcome of the presidential election.

The LSK, represented by Stephen Mwenesi, was told to argue about Section 83 of the Elections Act.

The section states that an election cannot be declared to be invalid because of failing to comply with the law “if it appears that the election was conducted in accordance with the principles laid down in the Constitution and in that written law, or that the non-compliance did not affect the result of the election”.

Monday morning, Nasa lead lawyer, Mr Orengo, will start off his presentations after the ruling on whether they will be allowed access to IEBC systems, kits and documents.

After failing to convince the judges to expunge Nasa’s late affidavits, IEBC and the President’s team were granted more time — up to 10.30am Monday, to file their replies.

Nasa will have five hours to lay out their case, the IEBC and Mr Chebukati three hours — one and a half hour each — while President Kenyatta has been allocated three hours.

On Saturday evening, Nasa argued their case to be allowed to access the server logs as well as the gadgets used to identify voters and transmit the results that were part of the Kenya Integrated Election Management Systems.

Mr Orengo argued that this was necessitated by the discovery that the forms submitted to the court by the electoral commission could not be trusted as they appeared to have been fabricated.

He showed the judges one form with a barcode he said showed that it belonged to a company in France.

Asked how long it would take to scrutinise the information from the servers and the 40,883 Forms 34A and the 290 Forms 34B, Mr Orengo wavered.

He initially said it would take at least three hours to scrutinise the Forms 34A, one hour to go through the Forms 34B and two days to look through the kits, but then later said the job could be done in five hours.

“We would not need any paper if we had access,” he said.

Mr Orengo did not say what would happen should the experts on either side fail to agree on whether IEBC servers were breached.

Lawyers Paul Muite, for IEBC, and Ahmednassir Abdullahi, for President Kenyatta, opposed the application, arguing that the information was contained in the forms filled by the Presiding Officers at each polling station and the Returning Officers at each constituency, which were available to Nasa for scrutiny.

Mr Muite said that allowing access to the servers would compromise their security while Issa Mansur, who is representing IEBC chairman Wafula Chebukati, said the IEBC would need time to back up the information first.

Mr Abdullahi and Mr Fred Ngatia, who is also on the President’s team, argued that by asking for Forms 34A and 34B as well as the logs from the servers and the gadgets, Nasa was making an application its lawyers had not pleaded in their petition.

“It is trite law and the practice that a party cannot depart from its pleadings,” said Mr Abdullahi.  “What Nasa is essentially doing is demanding evidence. They are saying that if we don’t get this evidence, our case will collapse.”

The IEBC and the President were united in asking the court to throw out four pieces of affidavit evidence that Nasa have indicated it will be relying on to prove that the electoral agency supplied the court with forged forms.