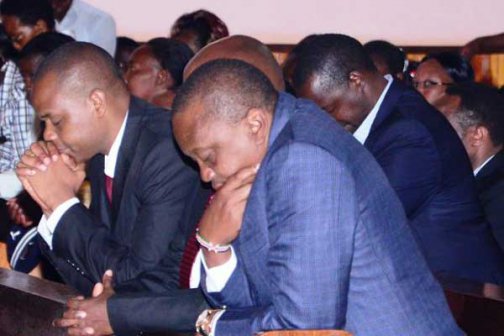 Jubilee is working on a strategy that will see President Uhuru Kenyatta win the next presidential poll by at least four million votes. Deputy President William Ruto said the narrow lead President Kenyatta had over CORD’s Raila Odinga in 2013 sparked a dispute over the election results, a situation the ruling coalition is determined to avoid come August. “In the last general election, we beat our competitors by a small margin which made them to take us to court contesting the poll outcome besides holding protests against us. This time around, we want to beat them by at least four million votes and send a clear message to the Opposition that we have better policies of transforming the country,” he said. In the 2013 elections, Uhuru beat Raila by 800,000 votes and avoided a run-off by a mere 9,000 votes.

ALSO READ: President Uhuru Kenyatta orders chiefs to deliver IDs to applicants Speaking separately, the President yesterday said he was ready to concede defeat if he loses the presidential election scheduled for August 8. In a brief interaction with journalists at Sagana State Lodge in Nyeri County where he is rallying potential voters to register as voters, the Head of State said the will of the people should be respected during polls. “What you can expect from me is to obey the will of the people. That is the law,” he said. State House Spokesman Manoah Esipisu, who accompanied the President, commended the African Union (AU) and Economic Community Of West African States (Ecowas) for their handling of the crisis in Gambia where long-serving ruler Yahya Jammeh was forced out of power after losing an election to Adama Barrow. “Regarding Gambia, we are happy with the way Ecowas dealt with the issue without foreign intervention. Africa can be able to solve these issues and the rule of law prevailed,” he said. In North Rift, Ruto said Jubilee Party would emerge victorious because it was the only party with a national outlook, focus, vision and future for all Kenyans. He taunted CORD saying: “Opposition leaders are now scared that the number of voters in support of Jubilee is increasing tremendously across the country. They are now terming our voters as ‘ghost voters’ because they are in a panic mood.” ALSO READ: Peter Kenneth warns against Jubilee infighting He accused the Opposition of engaging in empty rhetoric when Jubilee was focused on service delivery. “The reality is that Jubilee has a national outlook and has continued to command huge following across the country. This is why I am confident that we will win with a bigger margin compared to 2013,” Ruto said. The DP directed health institutions to unconditionally release identity cards they are holding because of pending bills to enable Kenyans to register as voters. Ruto noted that millions of IDs were held up in health facilities, thus denying their owners the opportunity to shape the country’s future. He spoke in rallies in Elgeyo Marakwet and Baringo counties on his way to Eldoret in Uasin Gishu on Saturday evening to rally residents to enlist as voters. “Go and collect your IDs in hospitals where they are held. The issue of pending payment will be sorted out later after you have registered as voters,” he said. The DP said this even as the Moi Teaching and Referral Hospital chief executive Wilson Aruasa recently revealed that they had in their possession 35,000 IDs dating back to 1998, held as collateral for pending medical bills, and called for a 50 per cent waiver. Ruto said Jubilee wanted to demonstrate to the Opposition that they won the 2013 General Election by widening the margin in the August polls. ALSO READ: Peter Kenneth warns against Jubilee infighting He decried the low registration turnout witnessed across the country, and asked Kenyans to register early to avoid a last-minute rush even as the mass voter listing enters its second week. Uasin Gishu County alone targets 200,000 voters but by yesterday, only 10,000 had registered. Ruto asked residents to register in large numbers and vote for Jubilee in the August elections. “It is upon us to come out in large numbers to register and vote for Jubilee so that we beat our competitors in the first round and by a bigger margin compared to 2013 elections,” he said . The DP advised Kenyans to choose leaders who will be accountable and who had the interest of the nation at heart.
Read more at: https://www.standardmedia.co.ke