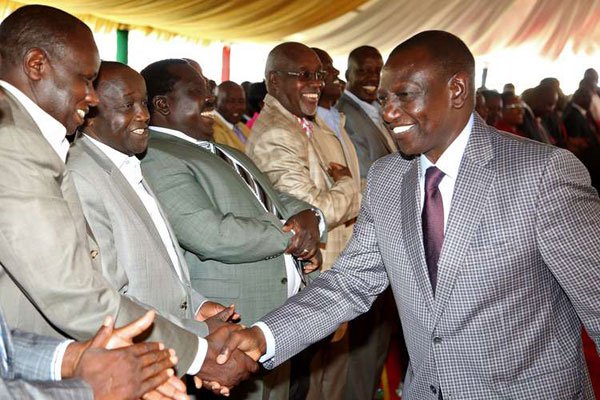 Jubilee Party is targeting to register 4.9 million new voters in its strongholds of central Kenya and Rift Valley to boost its chances of retaining the presidency in August elections.

Deputy President William Ruto on Tuesday kick-started the campaign to register more voters when he met hundreds of Jubilee leaders and aspirants from the Kalenjin community residing in 11 counties across the country at his Karen office.

Mr Ruto, who a day ago was involved in a supremacy battle with Kanu chairman and Baringo Senator Gideon Moi, informed the meeting that there were more than 1.6 million people who should be mobilised to register in the Jubilee strongholds in Rift Valley. He tasked the leaders, who included Energy Cabinet Secretary Charles Keter, to mobilise their people to register in droves when the registration exercise by the Independent Electoral and Boundaries Commission starts next Monday.

“For us to win in August, we must have numbers and this can only be achieved by asking the people who are eligible to vote to register in large numbers. As you campaign in your respective wards, constituencies or counties, you must mobilise the people to register so as to fully participate in the elections,” he said.

Soin/Sigowett MP Justice Kemei told the meeting that more than 300,000 people in Rift Valley had no identification cards and yet they were eligible voters.

At the same time, Devolution Cabinet Secretary Mwangi Kiunjuri revealed that the Jubilee leadership in Mt Kenya was targeting to register at least 3.3 million fresh voters to boost the chances of President Uhuru Kenyatta’s re-election.

“In Mt Kenya region alone, we have at least 3.3 million people with IDs but they don’t have voters’ cards. These are the people who we will mobilise to take voters cards starting next week,” he said on phone.

Mr Kiunjuri said that elections were about numbers and challenged the opposition to mobilise people in their areas to register enmass instead of planning to stage demonstrations.

While opposition strongholds of Nyanza, Western, Eastern and Coast registered dismal numbers of new voters, it was understood that between April and December last year, the former Central Province region registered 900,000 new voters. On Tuesday, opposition sources revealed that they are likely to call off mass action at the end of Wednesday’s meeting at Bomas of Kenya because it could interfere with registration of voters in their strongholds. Instead, they will mobilise their voters to register in big numbers “as a protest to President Kenyatta’s decision to sign into law the controversial Elections Amendment Bill”.

On Tuesday, the IEBC met more than 100 members from political parties to discuss ways of carrying out the voter registration campaign.

“The key issues addressed by the meeting include the distribution of Biometric Voter Registration kits, voter education and election timelines. IEBC informed participants that registered voters who wish to transfer their polling station will now make such applications from IEBC constituency offices,” said the commission’s communications manager Andrew Limo.

At his Karen office, Mr Ruto said Jubilee was just sticking to the law in ensuring elections are held in August, adding that preparations aimed at ensuring peaceful elections were ongoing.

He urged the leaders to mobilise many supporters to register as Jubilee Party members when the programme is rolled this Friday.

“Once our membership programme is launched this Friday, it is upon you as leaders to embark on the programme to register as many members as possible. We want the people to have the ownership of the party,” said Mr Ruto.

In Eldoret, Mr Moi invited Jubilee aspirants who are likely to get a raw deal during the nominations to join Kanu.

“Governors have done a lot in their first term in office. However, they should be cautious on their political direction to take as we head to the elections,” said Mr Moi. He urged the likes of former Minister Henry Kosgey, who is contesting for the Nandi gubernatorial seat on a Jubilee ticket to be cautious “lest he is locked out during the primaries”.