NAIROBI COUPLE LIVING IN AGONY AFTER THEIR THREE CHILDREN’S DISAPPEARANCE 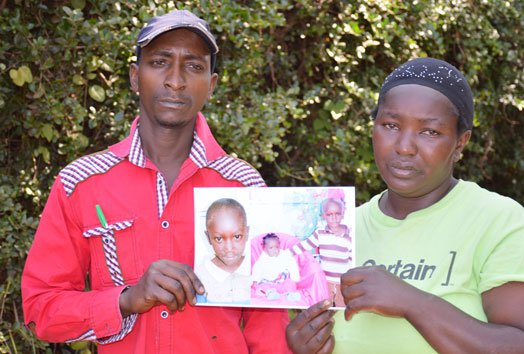 NAIROBI COUPLE LIVING IN AGONY AFTER THEIR THREE CHILDREN’S DISAPPEARANCE

By ERIC WAINAINA,
A couple from Roysambu estate in Nairobi is living in agony after its three children, two sons and a daughter, went missing on Sunday evening.

The children, Peter Kagetha, Samuel Kagunya and Beatrice Wanjiku, aged 11, four and one-and-a-half, are reported to have left their home at Ngomongo area at around 7pm and efforts by their parents to trace them have been futile.

Their parents, Ms Beth Wanjiku and Mr Paul Mbugua, said they had left the children at home in the morning, but when they returned at around 8pm, they did not find them in the house which was very unusual.

After inquiring from the neighbours, Ms Wanjiku, said they were informed that the minors were spotted leaving the compound together, but no one cared ask where they were going.

According to Ms Wanjiku, there was nothing out of the ordinary that could have triggered suspicion among their neighbours since there were many children playing outside, adding that some of them thought that they were heading to a nearby shop.

The neighbours, she said, told her that Kagetha was carrying the youngest while Kagunya was walking behind them.

“It’s normal for children to play, walk around and go to a nearby shop at that hour, and therefore there was nothing that could have aroused the neighbours’ suspicious,” a devastated Ms Wanjiku said.

By then, Ms Wanjiku and her husband were hoping that their children would return home, but their hopes dwindled after it emerged that Kagetha may have taken off out of anger after he was scolded by their neighbours for locking the youngest of them inside the house for hours.

“I was informed that after we left for work in the morning, he locked his one and a half-year old sibling from 9am to 4pm. The neighbours overheard her crying inside the house and that they confronted him but he was unhappy,” he said.

The couple embarked on frantic efforts to trace the children, including contacting their relatives and friends to inquire whether they have gone to any of them but all their efforts have been in vain.

The following day, they were informed that the previous night someone had spotted three children who had a similar description to theirs walking kilometers away.

This promoted them to report the matter at Njatha-ini and Marurui Police Posts, Kasarani Police Station and also Kiambu Police Post.

According to Ms Wanjiku, it’s not the first time the Kagetha is taking off from home after being lectured for misbehaving, saying sometimes he disappears for a week but her biggest worry is that this time he took his siblings along.

“He doesn’t like being asked to do anything including the household chores and every time he is scolded he takes off and only returns after a few days or every a week. I am afraid that the other children, who I was told left without sweaters and shoes, might run into danger,” she said.

She added, “He sleeps in the streets, and only returns home if he runs short of food. My fear is that with the other siblings with him, they might fall in the hands of Good Samaritans, and he may never have any reason to come back home because that has always been his wish.

NAIROBI COUPLE LIVING IN AGONY AFTER THEIR THREE CHILDREN’S DISAPPEARANCE Reviewed by samrack on January 10, 2017 .

Share thisFacebookTwitterPinterestEmailWhatsAppMr Paul Mbugua and his wife, Beth Wanjiku, hold photos of their three children who went missing from their Roysambu home, Nairobi on Sunday evening. PHOTO | ERIC WAINAINA NAIROBI COUPLE LIVING IN AGONY AFTER THEIR THREE CHILDREN’S DISAPPEARANCE By ERIC WAINAINA, A couple from Roysambu estate in Nairobi is living in agony after