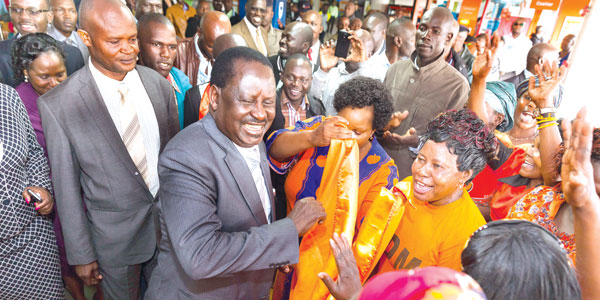 Led by the Majority Leader in the National Assembly, Mr Aden Duale, at separate functions, they claimed that the Eurobond was floated above board and its proceeds had been well spent.

Mr Duale said the fundamental aim of going for the Eurobond was to make sure that the government does not compete with the private sector in domestic borrowing.

“I want to tell Raila that Sh53.2 billion was used to pay outstanding loan to the local banks that was taken by you (Mr Odinga) and Kibaki during the coalition government. Whatever remained was put in the Consolidated Fund account at the Central Bank,” Mr Duale said in Garissa Town.

He told the opposition leader to respect President Uhuru Kenyatta and his deputy, Mr William Ruto, saying they were not in the same level as the Cord leader following Jubilee’s victory in the 2013 elections.

He spoke a day after Mr Odinga claimed that Eurobond money was used by well-connected individuals to trade in foreign stocks to make Sh34 billion in profits. Mr Odinga had also charged that both TNA and URP — which form the Jubilee Coalition — were on a looting spree.

“The URP wing is on scandals like land and kickbacks for contracts. The TNA wing is more sophisticated. They go for things like the Eurobond with which they traded in international stocks to make Sh34 billion,” Mr Odinga had claimed at the weekend.

“We are used to Mr Odinga making unnecessary alarmist statements that can cause panic and fear that the country is not heading in the right direction and yet when you ask him to substantiate or provide evidence, he cannot,” Mr Metito said.

He said Mr Odinga should accept that the country was no longer under the Grand Coalition Government, where he used to be Prime Minister, and that Jubilee was now in charge, with different policies on how to manage the country.

Mr Metito, also the Kajiado South MP, said just because the Grand Coalition government relied on the National Economic and Social Council for advise did not mean that the same should be expected of the Jubilee administration. Jubilee had different sets of policies and manifesto, which Kenyans agreed to when they voted it in during the last elections.

Chuka Igambang’ombe MP Mithomi Njuki also called on Mr Odinga to substantiate his allegations, saying it was easy to “throw stones” than to come up with solutions. He, however, said Kenyans were worried that the floating of the Eurobond, did not bring down interest rates as had been anticipated, but that they had actually gone up.

He said MPs in particular, required evidence from the Cord leader, so as to perform their oversight role by questioning the government on how the money borrowed from the international market was spent.

“When he claims that Jubilee is corrupt is like (sic) the pot calling the kettle black,” he said.

He also defended the country’s economy, saying both the International Monetary Fund (IMF) and the World Bank had given Kenya a clean bill of health, confounding pessimists who were saying that the economy was heading south.

The Kenyan currency, he said had lost only 22 per cent to the dollar, compared to most of the world currency, which had lost an average of 30 per cent.

Mr Kuria dismissed the Cord leader’s utterances as “propaganda” meant to destabilise the country. He said the economy was likely to stabilise starting next week and wondered what critics would be left saying once the country’s fiscal position bounces back.

Starehe MP Maina Kamanda also criticised Mr Odinga, saying he was known to have benefited from the awarding of the tender for the standard gauge railway and the Greenfields airport expansion project.

Mr Kamanda said the National Assembly Transport Committee, which he chairs, had tabled a report in the House detailing Mr Odinga’s alleged involvement in corrupt practices connected to the two projects, which were awarded when Mr Odinga was Prime Minister.

Jubilee MPs hit at Raila over claims loan cash was stolen Reviewed by samrack on October 25, 2015 .

Jubilee MPs hit at Raila over claims loan cash was stolen In Summary Starehe MP Maina Kamanda also criticised Mr Odinga, saying he was known to have benefited from the awarding of the tender for the standard gauge railway and the Greenfields airport expansion project. Mr Duale said the fundamental aim of going for the