PHOTOS: JKIA receive Lufthansa’s inaugural flight to Kenya.@Germany investment in Kenya,Kenya after 18 years of absence. A great boost for tourism.

36 hours and counting to Lufthansa’s return to Kenya 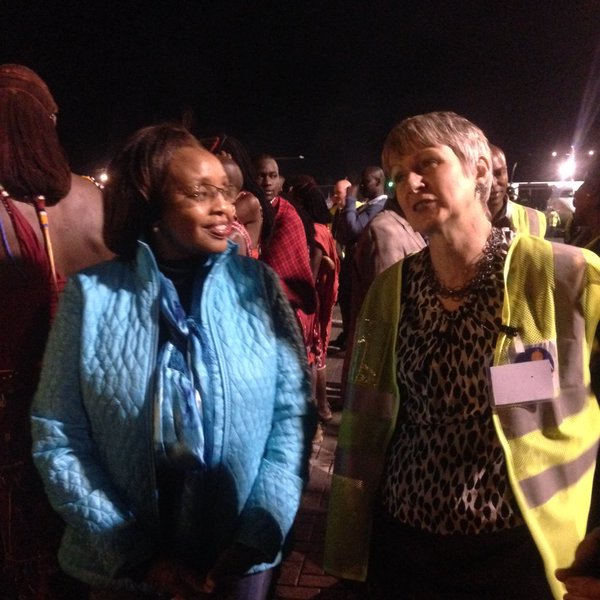 The last Brussels Airlines flight has left Nairobi amid a tearful goodbye from many, former staff and faithful passengers included, who fancied the ‘Savoir Vivre’ in the air. Brussels Airlines will now in a route exchange with Lufthansa serve Accra / Ghana while the German national airline, which previously had their LH flight number attached to the Brussels Airlines flight, is set to return to Nairobi after leaving the route in the late 1990’s. 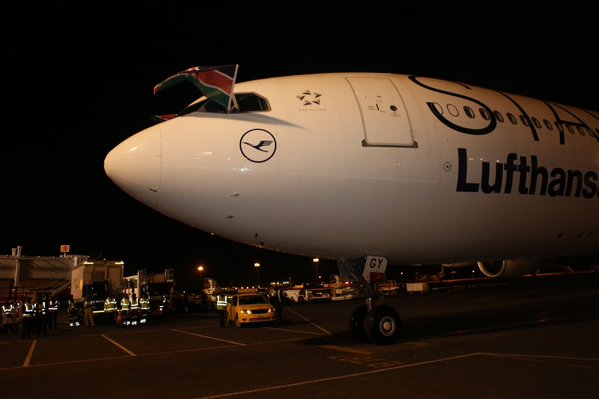 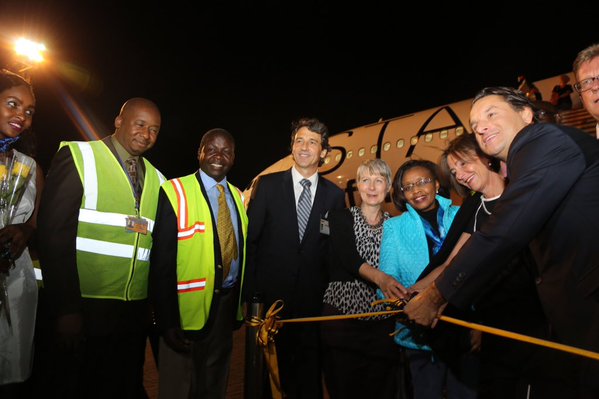 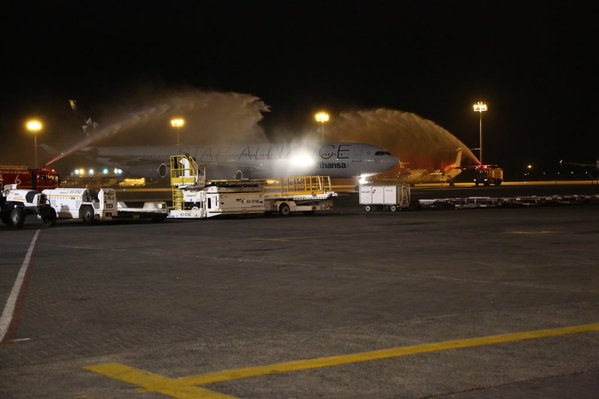 Lufthansa’s inaugural flight to Nairobi is now only a day away and Tobias Ernst, Country Manager for Kenya – he also remains in charge of Ethiopia where he was based until coming to Nairobi to set up the operation – took the opportunity to speak to this correspondent at the recently concluded Magical Kenya Travel Expo in Diani, where the airline had an exhibition stand.

It was soon obvious that the airline was stung by the article of 08th of October in which both travel agents and potential travelers had voiced their disappointment over reports that the airline had opted to downgrade the service from an Airbus A340 to a leased Private Air Boeing B737-700 and reduce the anticipated four frequencies to only three. (https://wolfganghthome.wordpress.com/2015/10/08/bad-start-for-lufthansas-planned-return-to-nairobi-as-changes-upset-the-market/)

According to Tobias was a fresh look taken at the route and, while the Boeing B737-700 will make regular appearances in Nairobi, was the number of A340 flights upped to 16 roundtrips between now and early January. Flights LH 590/591 will operate every Tuesday, Thursday, Saturday and Sunday, leaving Frankfurt at 11.10 hrs in the morning allowing for optimized connectivity with European and intercontinental flights by Lufthansa in to Frankfurt. The return flight will leave Nairobi at 23.20 hrs and is due to land back in Frankfurt at 05.55 hrs, again offering immediate onward connections into LH’s German, European and the global intercontinental network.

Among those A340 services will be the inaugural flight tomorrow, Sunday 25th of October, when senior Lufthansa Supervisory Board and Management members will do the honours to represent the company during the Nairobi celebrations.

Additional flights are also on the drawing board over the festive season, again to be operated with the Airbus A340. Notably was it pointed out that the Private Air B737-700NG BBJ1 [BBJ1 stands for the business jet version of the B737) offers passengers a configuration of 20 seats in Business Class and only 66 seats in Economy Class, providing that extra space on the single aisle aircraft to make it more acceptable in the market. It is also understood that the catering on the B737-700NG BBJ1 flights will be enhanced to make sure none of the passengers on board this aircraft type, as long as it is deployed on the Frankfurt to Nairobi route, will feel to have travelled on a ‘lesser’ aircraft.

It was also confirmed by Tobias during the meeting in Diani that only aircraft which were retrofitted with Lufthansa’s new business and economy class seats will be deployed on the route to Nairobi, alleviating fears expressed in the market that the inflight product would be anything less than state of the art. The three class configuration of the cabin includes, besides the type of Business Class seats used on the airline’s Airbus A380, Lufthansa’s new Premium Economy class with a 2x3x2 layout while Economy will be in the classic 2x4x2 set up.

From the start of the summer schedule next year will, according to Tobias, the flights be increased to five a week, all to be operated then with the Airbus A340. While daily flights remain an objective has no firm timeline been given when that will take place.

Private Air, registered in Switzerland, operates a fleet of presently 8 aircraft and flies scheduled services for Lufthansa, Scandinavian Airlines and EC Air under ACMI arrangements [ACMI stands for a lease including the aircraft, crew, maintenance and insurance].

Services operated for Lufthansa, besides the route to Nairobi, also include a nonstop flight from Frankfurt to Pune / India while a six times a week Copenhagen to New York’s Newark International Airport is operated for Scandinavian Airlines (SAS).

For LH 590 it is Happy Landings tomorrow evening in Nairobi as Lufthansa is making a return to the Kenyan skies. 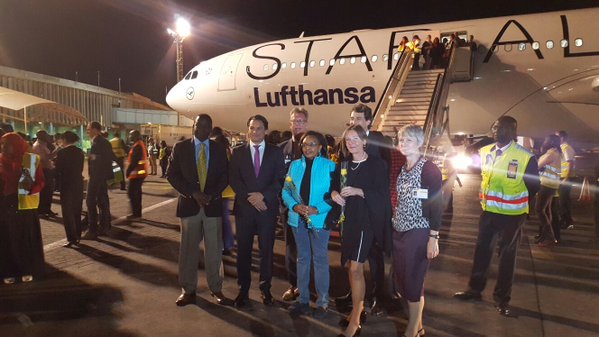 Tags: 36 hours and counting to Lufthansa’s return to KenyacrewEC Air under ACMI arrangements [ACMI stands for a lease including the aircraftKenya after 18 years of absence. A great boost for tourism.lufthansamaintenance and insurance].PHOTOS: JKIA receive Lufthansa's inaugural flight to Kenya.@Germany investment in KenyaPrivate Air B737-700NG BBJ1 [BBJ1 stands for the business jet version of the B737)wolfganghthome.wordpress.com/‘Savoir Vivre’
Previous Post