Jubilee, Cord up gear in final week of voter listing 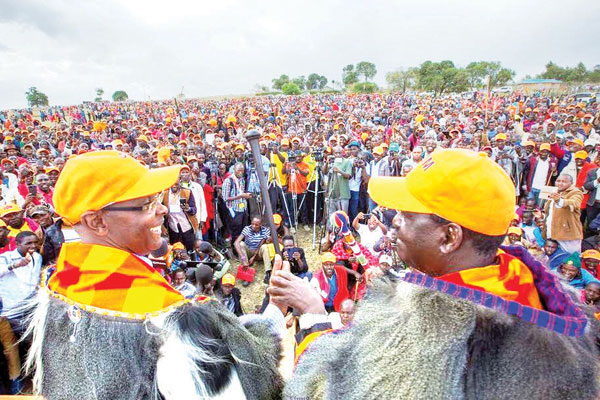 Jubilee, Cord up gear in final week of voter listing

Jubilee and Nasa yesterday continued with their campaigns to woo potential voters to register with only one week remaining to the closure of the Mass Voter Registration (MVR) exercise.

Meanwhile, President Kenyatta is today set to start his final leg to mobilise voters to get listed, with visits lined up to a number of counties.

State House spokesman Manoah Esipisu said the official programme will be released in due course, but he said the Head of State will tour Nairobi, Nakuru, Nyandarua, Kisii and Nyamira.

In Mombasa, Ruto urged voters not to be misled into supporting individuals with selfish agenda and no development plans for Kenya.

“Kenyans should know how to choose between those who have an agenda for this country and those who only want to share seats among themselves at the expense of serving selfish ends,” he added.

Ruto enumerated the Jubilee Party scorecard saying it had initiated many development projects across the country and told coastal people to ask the Opposition leaders what they had done for them.

The Deputy President asked leaders to allow the Independent Electoral and Boundaries Commission (IEBC) to carry out its mandate without undue interference. In Narok, Raila said he was best suited among the Opposition leaders, to lead the country.

He said his “experience and proven record for fighting for democratic rights” deserved him a chance to fight it out with President Uhuru Kenyatta during the August 8, General Election. He added that if elected, he would bring major reforms to the country in the first 90 days in office.

“Of all who are fighting to remove the Jubilee administration from power, I’m the best suited for the job. I will, if elected, bring major reforms to the country, the way Tanzania President John Magufuli has done to his country,” he said.

He said he has been in the forefront in fighting for justice and equality and asked Kenyans to shun tribal politics and vote for him.

Speaking at Naisuya area in Narok during a political rally where the Narok North MP Moitalel Kenta defected to ODM, he said he was confident the fledgling National Super Alliance (NASA) outfit would win majority elective seats and form the next government.

Meanwhile, Wiper Party leader Kalonzo Musyoka appealed to locals in Kisii to register as voters to exercise their democratic right of electing leaders they prefer.

Kalonzo, who campaigned in South Mugirango, Bonchari and Bomachoge constituencies said Opposition leaders were working out to unite under NASA, saying the alliance would form the next government.

Accompanied by Borabu MP Ben Momanyi and several Wiper aspirants, he appealed to Kenyans to vote for him if he is picked the NASA presidential flag bearer.

“Nasa can only win seats to form the government if you register in large numbers and vote for its presidential flag bearer,” he said.

Jubilee, Cord up gear in final week of voter listing Reviewed by samrack on February 5, 2017 .

Share thisFacebookTwitterPinterestEmailWhatsAppPhoto: Cord leader Raila Odinga receives Narok North MP Moitalel Kenta (left) who defected to ODM yesterday. PHOTO: PSCU/COURTESY. Jubilee, Cord up gear in final week of voter listing Jubilee and Nasa yesterday continued with their campaigns to woo potential voters to register with only one week remaining to the closure of the Mass