JOHO TO KNOW HIS FATE ON KCSE PAPERS IN A FORTNIGHT 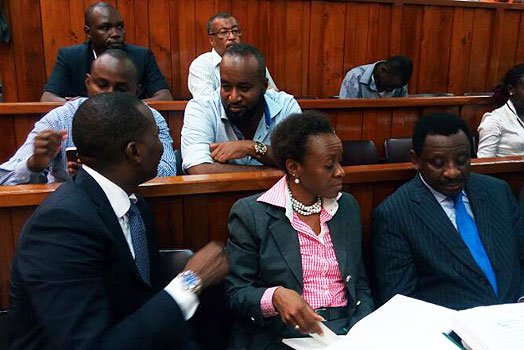 JOHO TO KNOW HIS FATE ON KCSE PAPERS IN A FORTNIGHT

Mombasa Governor Ali Hassan Joho will know in the next two weeks whether the court will stop police from arresting and charging him on suspicion he forged his Form IV certificate and taxation papers.

The High Court said it will rule on April 26 whether to stop or not stop police from arresting, charging and prosecuting Mr Joho over his Kenya Certificate of Secondary Education.

Mr Joho, through lawyers James Orengo, Julie Soweto and Dennis Mosotah, told Justice Ogola the court has inherent judicial powers to stop the IG and the DPP from abusing their constitutional clouts.

The Siaya Senator said various state agencies have ganged up in a scheme to arrest and prosecute the combative governor who is also ODM deputy party leader.

In his submission, Mr Joho urged the court to halt any impending arrest facing him until elections are held and concluded on grounds that there are ploys to have him step down from office.

“This is not a normal police investigations but a quasi-political investigations. No proper foundation for the purported investigations has been laid. There is a direct threat directed at the petitioner, “said Mr Mosoti.

Mr Orengo added: “The alleged investigation is all about Hassan Ali Joho. There is constant dragging of the governor name into many cases…some robbery with violence, anti-corruption, tax evasion. The governor is being persecuted.”

Mr Joho’s legal team argued that both the DPP and IG have abused their constitutional authorities in their plot to prosecute Mr Joho thereby sidestepping his fundamental constitutional rights.

“The law and justice are two different things. There is clear misunderstanding of law under the new constitution. Action taken by judicial officers are subject to judicial review. The distinction should be made about abuse of powers. We are dealing with the question of abuse and violation of the constitutional rights of the governor,” Mr Orengo said.

They argued that it is wrong for the court to stop the investigations unless Mr Joho proves there is ill motive to probe him.

Mr Muteti said it will be unconstitutional for the court to issue the conservative orders, adding that police were mandated by the constitution to carry out investigation of any nature.

“It will be unconstitutional for the court to suspend authority of the Inspector General of Police, the Director of Criminal Investigations and of the DPP. It is unconstitutional to bar investigations especially where there is no evidence of bad faith on the part of authorities,” Mr Muteti added.

The DPP and AG legal teams submitted that the government agencies had been given the constitutional mandate to investigate any case and it would be violation of the constitution to stop them from discharging such functions.

He stated that Mr Joho is merely apprehensive and might be cleared or even become a state witness.

On March 31, the court said the arrest and prosecution of Mr Joho should only take place after hearing his plea.

Mr Joho said the prosecution would hurt his constitutional rights.

Judge Ogola said Mr Joho should not be arrested, harassed, intimidated, questioned on his academic qualifications or over any investigations regarding an alleged forgery of a 1992 examination slip.

Source: Nairobi News
JOHO TO KNOW HIS FATE ON KCSE PAPERS IN A FORTNIGHT Reviewed by samrack on April 13, 2017 .

Share thisFacebookTwitterPinterestEmailWhatsAppMombasa Governor Hassan Joho consults his lawyer Dennis Mosota at the Mombasa High Court on April 13, 2017. PHOTO | WACHIRA MWANGI JOHO TO KNOW HIS FATE ON KCSE PAPERS IN A FORTNIGHT Mombasa Governor Ali Hassan Joho will know in the next two weeks whether the court will stop police from arresting and