Jackie Odanga’s music is inspired by God and Luhya tradition 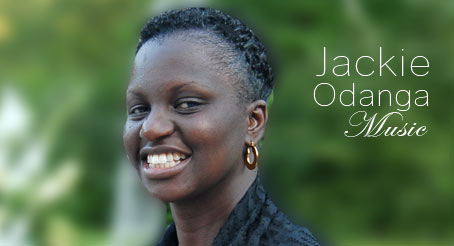 Jackie Ochieno Odanga truly defines the meaning of a natural God chosen artist. She has the ability to lead her audience not only in cultural and traditional singing and dancing, but most importantly in the presence of God through powerful praise and worship. Born in Kenya, she attributes the discovery of her musical talent to her grandmother, Jedidah Ochieno, who constantly taught and sang for her Christian songs.

Jackie grew up in Madaraka estate, Nairobi. Her passion for music started in Lugulu Girls, Kakamega. Later on she joined the Nairobi Pentecostal Church (NPC Central) choir where her talent was developed.

She continued to explore her musical talent in Sweden where she studied for a couple of years. Jackie is now the worship leader at International Faith Outreach Ministries (IFOM) in Massachusetts, USA and she has had the privilege of sharing the worship stage with renowned musician Alvin Slaughter, Reuben Kigame , and ministering with great musicians such as Carol Mbithi, Douglas Jiveti among others. She has also had the opportunity of singing for powerful ministers such as Reverend Grace Kariuki, Apostle Baraza and Apostle Frank Mwebesa among others at various crusades and concerts.
Furthermore, Jackie has had the opportunity of touring various cities in the U.S.

Her debut CD: “HERITAGE”. She claims was released after careful thought and prayer. It was meant to traverse her journey that in life irrespective of where we are born, prayer takes precedence, and then we all require to be washed in the blood of Christ to finally ensure our names are in the lambs book of life. In-between, life will be filled with the things we love and things we abhor.. However we are called to step-out, step-up and be counted. She enlisted the help of her nephews, Tony Akenga ,Harold Akenga and her husband Robert Odanga of Worcester, Massachusetts who helped her produce and arrange this masterpiece that is in her words meant to captivate the audience from start to finish. According to the producers, their vision was to put on market a DVD that one could be tempted to rewind but the subsequent clips could not allow you to do so. The artists also endeavored to share their actual experiences in this production.

According to Jackie, she has learnt so much and she promises to up her game in the subsequent productions.
Her music comprises of traditional Luhya instrumentation fused with modern high end music production that embodies Jackie’s musical talents .This DVD is guaranteed to keep you, the listener magnetized and on your feet.

She claims that everybody privileged to preview this tape has been wowed by the simplistic appearance of the production yet according to Jackie and the producers claim that the music is very complex and mosaic in nature. Because of the depth in meaning, they used the stained glass and collage approach to compliment this. This video will surely transcend culture and race and will hopefully be acclaimed as a great piece of Art, that is well appreciated with an artistic eye There is a lot to be decoded and that is the challenge Jackie throws to you. The literal translation of a traditional song has the effect of distorting the actual meaning.

Jackie claims that the forthcoming concert is meant to soften the ground for a major upcoming revival especially in the city of Springfield, MA. Thereafter, she hopes the burning flames will engulf the entire globe. She prays that all those turning out for the concert will experience the presence of God.

More about the artist and this concert can be obtained from the following links.

Jackie Odanga’s music is inspired by God and Luhya tradition Reviewed by samrack on January 6, 2015 .

Jackie Ochieno Odanga truly defines the meaning of a natural God chosen artist. She has the ability to lead her audience not only in cultural and traditional singing and dancing, but most importantly in the presence of God through powerful praise and worship. Born in Kenya, she attributes the discovery of her musical talent to