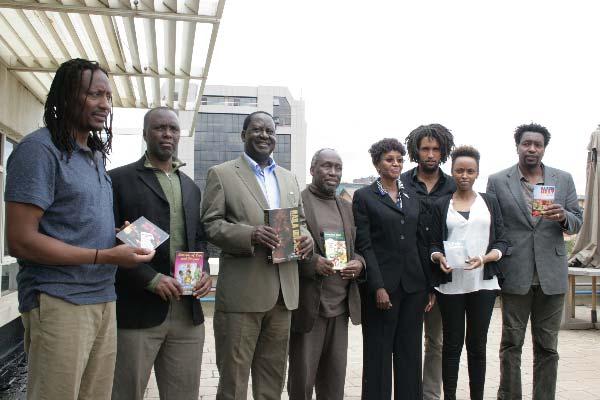 FacebookTwitterPinterestEmailWhatsApp
Former Prime Minister Raila Odinga yesterday told celebrated Kenyan writer Ngugi wa Thiong’o that 52 years after Kenya attained self-rule, the Jubilee government was creating the same conditions that led to their detention by different regimes.
Raila was detained by President Daniel Moi’s government and Ngugi by founding father Mzee Jomo Kenyatta’s government.
The former Prime Minister chose his meeting with the renowned writer and academic to trumpet his past credentials as a former political detainee and to accuse the current government of allegedly borrowing from past administrations, disregarding the aspirations of generations of Kenyans since independence.
Echoing the title of his father Jaramogi Oginga Odinga’s famous autobiography, “Not Yet Uhuru”, the CORD and ODM leader accused the current Jubilee administration of betraying the independence dream by allegedly disregarding the vision of second liberation heroes.
“Day will follow night. The darkest hour is just before dawn. We are in situation of darkness in our country, but we know that the sun is going to rise.
“…Nobody knows better than Prof Wa Thiong’o that Kenya has had several fleeting moments of achievement that got hijacked and betrayed. It happened with our independence. It had happened with our second liberation. It is happening now with our new political order which is facing serious resistance,” said Raila, who presented Ngugi with his autobiography, “The Flame of Freedom”.
In recent months, the CORD leader has been trying to reach out to young Kenyans he believes are unaware of the country’s past political struggles and his role in it.
Only a few months ago, the former PM, who is preparing for his fourth stab at the Presidency, launched a new website in which he dedicates a significant section to his role in Kenya’s second liberation. Ngugi is in the country for the golden jubilee anniversary of his first novel, ‘Weep Not Child.’
It is part of his collection of novels and essays that include “Petals of Blood”, “A Grain of Wheat” and his most recent writings, “Dreams in a Time of War” and the “House of Interpreter”.
Ngugi’s visit to Odinga’s Capital Hill offices presented the former PM with the opportunity to contextualise Kenya’s struggle for political space and further reach out to his supporters.
He claimed that some Kenyans were mistaken that the fight for the new Constitution was the beginning of struggle for change in the country.
“A lot of times we talk about the struggle for change in Kenya but we hardly agree when this struggle really began. Some think it began in the 1990s. There are those who think it began with the final push for a new Constitution which was eventually realised in 2010.
“But I maintain that the struggle has been much longer…it has taken different twists and turns at different times. It has taken different forms, sometime peaceful and sometimes violent. But the goal had always been a reach for a new Kenya…” said Odinga.
Ngugi, who has often kept his political leanings close to his chest, chose Raila’s offices as the first stop in a series of activities lined up to mark the launch of the 50th anniversary of the publication of his book, which is a narration of the emergence of modern Kenya and a study in fortitude.
Echoes of their shared political history were evident as Ngugi acknowledged that they both were detained for their struggle for greater political space. He also expressed optimism for a better country, despite the existing political differences.
He called for greater political, ethnic and social cohesion in the country, recalling a 1960s newspaper photograph that showed peasants in Central Kenya donating food to flood stricken residents of Nyando plains.
“Differences are not necessarily bad. It is through these differences that new ideas come into being.
It is a very powerful force that allows new things to emerge,” said Ngugi. Ngugi, who was accompanied by some members of his immediate family, is scheduled to give a series of lectures at the University of Nairobi and Kenyatta University.
“I want Kenyans to dream. It is through differences that new ideas come into being. It is a very important force that allows ideas to merge,” he said.
Raila’s critics in the Jubilee government fault him for being in politics “too long” and seeking to use Kenya’s past freedom struggles for political capital.
The event was also attended by officials from Ngugi’s publishers, the East African Educational Publishers. Economist David Ndii called for more practical solutions to the challenges facing the country.
Read more at: The Standard
It’s not yet Uhuru, Raila tells Ngugi wa Thiong’o Reviewed by samrack on June 3, 2015 .