The ICC ruled on Tuesday that DP William Ruto and journalist Joshua Sang have no case to answer but said the prosecution can appeal.

Ruto and Sang had been facing crimes against humanity charges over the 2007/8 post-election violence that left 1,200 dead and at least 600,000 displaced.

Judge Eboe Esuji said in a statement on Tuesday that proceedings were declared a mistrial “due to a troubling incidence of witness interference and intolerable political meddling”.

“The charges are hereby vacated and the accused are discharged from the process without prejudice to their presumption of innocence or the prosecutors right to re-prosecute at a later time.”

Osuji said victims should be invited to express their views and concerns for the sake of assistance and reparation.

Victims’ lawyer Wilfred Nderitu said the decision by the Trial Chamber, following a process that began six years ago, should be respected.

The collapse of the case against Ruto and his co-accused follows that last year of President Uhuru Kenyatta.

In a 95-page  no-case-to-answer motion, Ruto had said the witnesses used to confirm his charges never took the stand, leaving the prosecution with a “case built almost entirely on hearsay”. 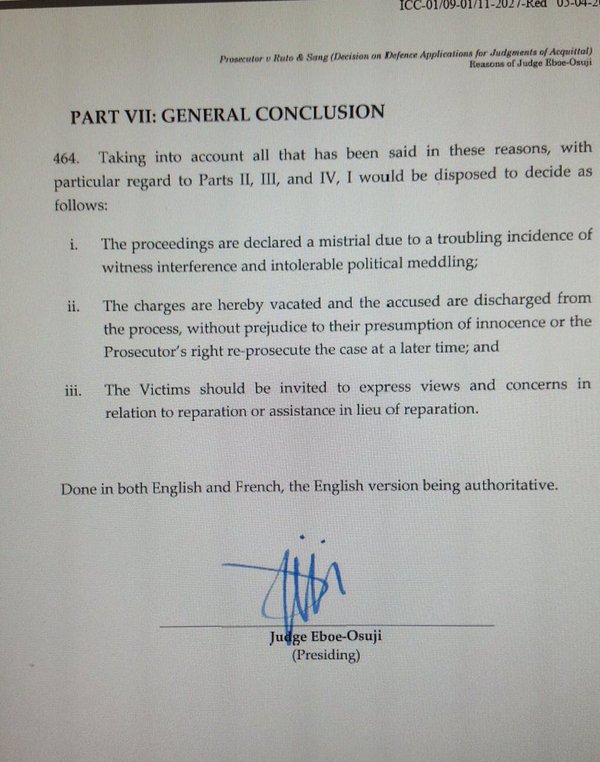 He had been charged with murder, deportation (or forcible transfer of populations) and persecution.

Through lead counsel Karim Khan, the DP had said there was  no evidence that he bankrolled the violence and accused the ICC of failing to thoroughly investigate Kenyan cases.

Prosecutor Fatou Bensouda claimed Ruto was the head of a multi-faceted network composed of political, media, financial, tribal and military components whose aim was to expel the Kikuyu from the Rift Valley.

But the DP said Bensouda had failed to link him to businessman Jackson Kibor and former Mount Elgon MP Fred Kapondi, who are alleged to have worked under him.

Bensouda had said she had enough evidence to convict Ruto and Sang.

Read More on :  Why I have no case to answer says Ruto

Also read:  I have evidence to jail Ruto, says Bensouda