IEBC to give technical support to Jubilee for smooth primaries 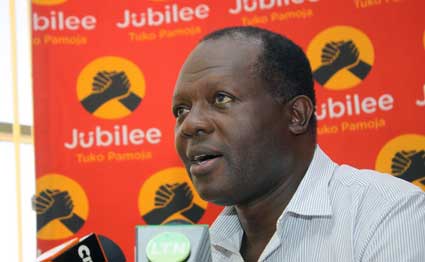 IEBC to give technical support to Jubilee for smooth primaries

The electoral commission will still offer vital assistance to make nominations for the Jubilee Party successful.

The Independent Electoral and Boundaries Commission (IEBC) has said they can only provide technical support, due to their heavy workload ahead of the August 8 general election.

“lEBC will not conduct but will be part of our nomination process,” head of Jubilee secretariat Raphael Tuju said on Friday at the party headquarters in Nairobi.

He said the commission had agreed to audit the process to ensure it meets set quality standards.

“Collaboration with IEBC will be there. But, for a credible exercise, we not only need the IEBC and the tools of trade but collaboration of everyone including aspirants,” Mr Tuju said.

He said the party will use IEBC ballot boxes and the commission will help train clerks, presiding and returning officers.

To address cases of favouritism, the party will consider reshuffling officials in charge of the exercise in constituencies.

“lf they are local people and have specific candidates (whom they support), we can reshuffle them so that there is less contamination of the process by people with vested interests,” Mr Tuju said.

He further appealed to security agencies to investigate concerns that the electoral system can be hacked.

This follows cases of hacking in the banking sector.

“We feel vindicated as a party when we insisted there should be a backup.

“But we feel concerned that some parties didn’t want a backup and some of the hacking suspects are associated with political leaders from these parties,” Mr Tuju said.

At the same time, the Jubilee party has extended the presentation of nomination applications for five more days from Monday next week due to increasing number of aspirants.

IEBC to give technical support to Jubilee for smooth primaries Reviewed by samrack on March 10, 2017 .