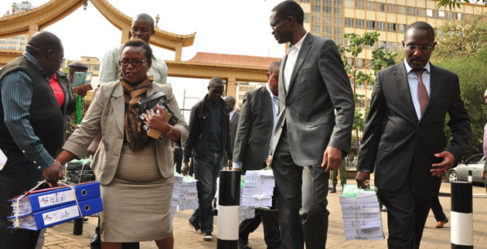 The Commission’s Chief Executive Ezra Chiloba transported all 109 volumes of the 54,400 folios to the Supreme Court registry accompanied by lawyer Wambua Kilonzo/CFM NEWS

The Independent Electoral and Boundaries Commission on Tuesday submitted to the Supreme Court originals of all the 40,883 Form 34As and all 290 Form 34Bs used to determine the presidential election outcome – including the final tally, Form 34C.

The Commission’s Chief Executive Ezra Chiloba transported all 109 volumes of the 54,400 folios to the Supreme Court registry accompanied by lawyer Wambua Kilonzo.

“This is just the first dispatch as required by the rules governing the petition, and we expect that by Thursday this week we’ll be filing our responses with regards to the petition so just to confirm that we have all the forms, we’re submitting them to the Supreme Court and we are getting ready for the case.”

He also took the opportunity to assure that there was no mischief intended when the Commission sought to retrieve the forms for Embakasi South over the weekend.

“We had requested all the Returning Officers to ensure they give to us the original copies of the Form 34As, so what happened is that the Returning Officer for Embakasi South who has been in hospital for two days, instructed the Deputy Returning Officer – who is a temporary staff of ours – to go and retrieve the forms so when they got to the warehouse they did not follow the procedure properly and by mistake they ended up opening up the ballot boxes.

“But we want to assure you that all the documents with respect to the 16 ballot boxes are intact and everything has been accounted for and we don’t think, not we don’t think… there was no mischief at all!”

Chief Justice David Maraga on Monday set out the timelines for the filing of written submissions as the bench prepares itself to hear the oral submissions.

This was after they reconsidered their pronouncement that they would not be moving to court.

The Commission’s Chief Executive Ezra Chiloba transported all 109 volumes of the 54,400 folios to the Supreme Court registry accompanied by lawyer Wambua Kilonzo/CFM NEWS IEBC submits now famed Forms 34 in defence of Uhuru win The Independent Electoral and Boundaries Commission on Tuesday submitted to the Supreme Court originals of all the 40,883 Form