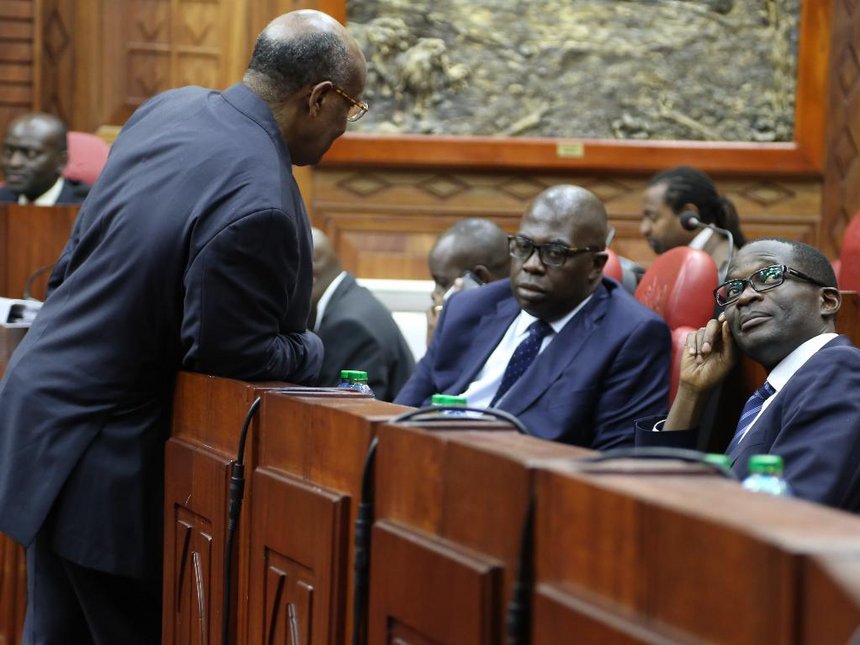 IEBC commssioner Abdullahi Sharawe and CEO Ezra Chiloba chat when they appeared before the National Assembly and Senate joint select committee that is resolving the ongoing IEBC impasse./HEZRON NJOROGE

The IEBC has unveiled a new roadmap for the already bitterly contested 2017 polls, outlining key timelines critical to leading coalitions as the general election draws near.

In the new plan, IEBC will advertise for, recruit train and deploy staff to 57,000 registration centers between this month and December 21.

This would be followed by a one-month mass voter registration to kick off on December 21, four days to Christmas.

But before the mass voter registration drive, the electoral agency will roll out voter education for a week from December 16 to 20.

Mass voter registration will be a litmus test for President Uhuru Kenyatta and his presumptive challenger Raila Odinga. as it will be the last to the polls.

Analysts say the hotly contested election will be won on the strength of voter registration in the strongholds of the protagonist coalitions, Jubilee and Cord.

Meantime, the earliest the new IEBC commissioners can be in office is mid-January, if the positions are not readvertised. The five sort-listed candidates were not deemed suitable

According to the revised electoral calendar, by December 2, IEBC would have advertised for the supply and delivery of all technology.

None has been acquired nine months to the polls.

However, by law, the electoral commission should have all the technology ready by January 8.

All systems should be tested and verified by June 8.

In its strategy paper in September, IEBC had warned that the timelines in the new law are not feasible and warned that the amendments in the legislation have “far-reaching implications on the management of elections, especially in 2017”.

“The major challenge will be around managing the acquisition and implementation of technology,” the document says.

Among the tenders to be advertised on Friday is purchase of 57,000 new BVR kits and 57,000 SD Cards (Secure Digital Card).

This means the commission only has 19 days to acquire the high-value equipment.

The first high-value procurement by the commission — a Sh2.5 billion tender for the supply of ballot papers — has been rocked by a legal duel.

The release of the new timelines is perhaps the clearest indication that the commission currently led by Ezra Chiloba is ready to go to the polls without amendments to the new law.

Cord had pledged it would not allow even a comma to be deleted from the Election (Amendment) Act 2016 — a product of painstaking negotiations with Jubilee.

But on Monday, IEBC secured a major victory after the Public Procurement Administrative Review Board declined to overturn the tender award.

However, the titanic legal duel that has sucked in Jubilee and Cord now heads to the High Court and the losing bidder, a South African firm, indicates it is not over yet.

In the new roadmap, IEBC said all political parties must submit a list of all the people who will participate in the primaries 60 days to the polls.

However, by June 8, all parties must submit to IEBC a list of nominees.

The Commission will then gazette within seven days the names of those nominated.

However, political parties should present by June 23 the names of those they want to put in nominated slots after the elections.

It is not clear, however, when IEBC will open its voter register for an audit by a “professional reputable firm”.

This was one of the recommendations of the joint House team on electoral reforms that was enacted into law.

The audit should be carried out 30 days after the new Act goes into effect.

This means that IEBC could be behind schedule since the Act became operational on October 4.

Cord had however claimed IEBC is seeking to water down the level of the audit of the voter register envisioned in law and asked the commission to shelve the plan.

“They cannot undertake this extremely important exercise in the absence of the new commissioners who are going to be held responsible and accountable to the people of Kenya for the conduct of the general election next year,” Siaya Senator James Orengo had warned.

The Election (Amendment) Act 2016 also makes it mandatory that no later than 90 days before the August 8, 2017, polls the IEBC must open the register of voters for verification of biometric data by the public.

That at polling stations is scheduled to take 30 days.

“The Commission shall upon the expiry of the of the period for verification revise the register of voters to take into account any changes in particular arising out of the verification process,” an IEBC matrix based on the new laws reads in part.