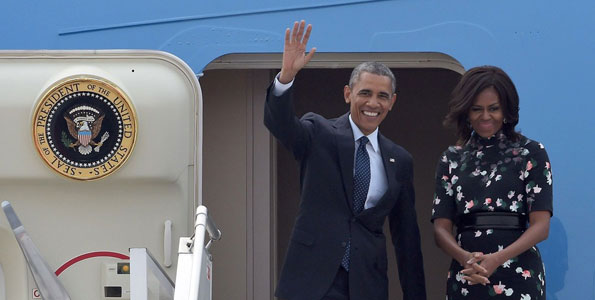 From an African perspective, President Barack Obama’s forthcoming trip to his father’s homeland needs no justification. In line with the African philosophy which holds that “I am because we are”, no self-respecting “Son of Africa” would fail to sojourn to the land of his ancestors.

Yet a recent article by Robert Rotberg which was published in the influential Politico magazine has ignited a raging debate in the American media as to the merits of the visit. Titled Going to Kenya is a Dumb Idea, Mr President, the article is as provocative as it is reflective of the conservative America’s cynical assessment of US-Kenya relations.

Coming at a time when Kenyans are still in mourning following the Garissa University terrorist attack, the mean-spirited nature of the article needs to be contrasted with the heart-felt response by Kenya’s Maasai community to similar acts of terrorism on American soil in September 2001.

Perhaps no other tribute moved Americans more than the simple gift of 14 cows offered by the Maasai “as a handkerchief to wipe their tears”.

In expressing gratitude, the then American ambassador to Kenya, Michael Ranneberger was reported by the New York Times to have told the Maasai, “What you did to help us will not be forgotten”.

This gesture of generosity by the elders of Enoosaen showed Americans and the world the true meaning of compassion because they gave that which they value most as a pastoralist community living in a remote corner of the world.

But how ironic that when Kenya is faced with similar terror attacks, one of the top Africa experts in the US offers not a hint of empathy but a contemptuous and patronising appraisal of the country and the planned presidential trip.

Kenya has in fact paid a heavy prize for being one of the staunchest long-term allies of the US in Africa. The 1998 bombing of the US embassy in Nairobi by Al Qaeda resulted in 213 fatalities and more than 4,000 wounded, most of whom were locals.

In an earlier era of the Cold War, when some of the more enterprising African leaders did brisk business by switching ideological sides depending on the highest bid for their loyalty, Kenya remained steadfastly in the Western capitalist bloc led by the US.

It appears that American critics of Kenya have not learned any lesson in loyalty, one of the most basic human values which requires that we stand by those who stood by us in our hour of need.

Mere nostalgia is hardly the reason for President Obama’s forthcoming trip to Kenya. Rather, he’s scheduled to attend the 2015 Global Entrepreneurship Summit, a smart decision given that the East African region currently has some of the world’s fastest growing economies.

In spite of the obvious challenges facing the continent, African is economically and demographically an emerging power that the US can no longer afford to ignore.

Just ask Africa’s new best friend China, which is enthusiastically filling the vacuum left by colonial and Cold War powers! Whilst the Chinese have been literally transforming Africa primarily through infrastructure development, many analysts argue that the US has been sleeping through the revolution. Through Obama’s trip, perhaps American investors can begin to play catch-up?

Mr Rotberg’s moralising and double standards about Kenya are glaring given that the US has for decades coddled Middle Eastern regimes famous for egregious human rights abuses and contempt for democratic principles.

The major casualty of this foreign policy “realpolitik” has been America’s image in the region and in the wider Muslim world, hence the oft-stated desire by US leaders to wean the country of its dependency on Middle East oil.

How Obama’s July trip to Kenya serves American interests Reviewed by samrack on May 18, 2015 .

The American President plans to visit Kenya in July. PHOTO | FILE |   AFP How Obama’s July trip to Kenya serves American interests From an African perspective, President Barack Obama’s forthcoming trip to his father’s homeland needs no justification. In line with the African philosophy which holds that “I am because we are”, no