How Kenya tackled the insecurity challenge in 2015 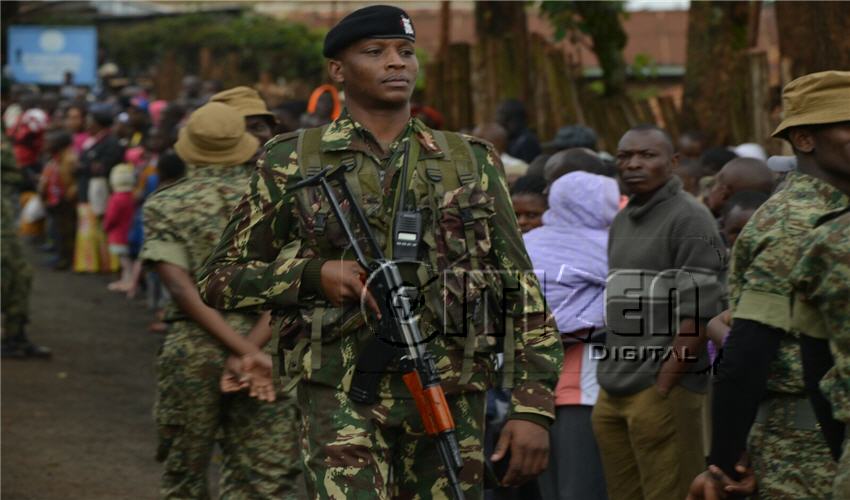 2015 is the year Kenya suffered one of the worst terror attacks in recent times.

But, 2015 is also the year the country made a statement of triumph over terror, with the reopening of the Westgate shopping mall in which 67 people were killed and scores injured when gunmen stormed the mall on September 21, 2013.

Christians and Muslims made a statement that they would not be divided along religious lines during a December 21st Mandera bus attack.

The attackers ordered people off the bus in Mandera before telling them to split into groups of Muslims and non-Muslims.

The Muslims refused their demands – daring the alleged extremists to kill them too.

“The Muslims stood with the Christians and dared the attackers to kill them all or leave,” said Mandera Governor Ali Roba. “This forced the militants to leave in a hurry fearing retaliation by residents from nearby villages.”

No one has taken responsibility for the attack, which killed three people, but the militants are suspected to be from the terrorist group Al-Shabaab.

There are also plans to reopen the Garissa University College.

The terror attack at Garissa University College changed everything.

“Armed attackers forced their way into Garissa University by shooting at guards manning the main gate at 5.30am. The attackers shot indiscriminately while inside the university compound,” Inspector General Joseph Boinnet said in a statement posted on his Twitter handle.

“Police officers who were at the time guarding the students’ hostels heard the gunshots and responded swiftly and engaged in a fierce gunfight,” he added saying the besieged officers asked for reinforcements immediately.

Hooded gunmen stormed the campus in the early hours, setting off explosions and exchanging gunfire with security services for several hours.

The attackers shot their way into the campus during the pre-dawn attack.

A spokesman for Somalia’s Al-Qaeda-linked Al-Shabaab, told AFP the group was behind the early morning assault on the university in Garissa and had taken non-Muslims hostage.

“When our men arrived, they released the Muslims. We are holding others hostage,” said Al-Shabaab spokesman Sheikh Ali Mohamud Rage.

He said those seized were Christians and added that “our people are still there, they are fighting and their mission is to kill those who are against the Shabaab.”

“Kenya is at war with Somalia,” Rage said, referring to the thousands of Kenyan troops in Somalia as part of an African Union military mission.

Al Shabaab militants have killed more than 400 people in Kenya since April 2013 with the government struggling to stop fighters and weapons coming across the 700 km border with Somalia.

Kenya has shown no inclination to pull out of Somalia where its troops, part of an U.N.-backed African Union peacekeeping mission (AMISOM) have wrestled swathes of territory from the Islamist group.

In November 2014, 36 people were massacred in an attack at a quarry in Koromey area, Mandera County, a few kilometers from the Kenya – Somalia border.

The attack was the second in a fortnight.

On November 22nd 2014, 28 passengers aboard a Nairobi bound bus were killed by Alshabab militiamen, an attack that kicked off an exodus by non-local professionals and casual labourers from the North Eastern region.

In July 2015, an unknown number of Al Shabaab militants sneaked into the country from Somalia and raided Soko Mbuzi, an area inhabited by non-locals, killing 14 people and leaving 11 injured.

It was reported the attackers were aided by local collaborators.

How have these events shaped Kenya’s war against terror?

“There is no government in the world, which will accept to be defeated by terrorism,” said Interior Cabinet Secretary Joseph Ole Nkaissery.

The resolve to defeat acts of terror is stronger than the deep wounds terrorists inflicted on Kenyans.

“Alive in our minds and hearts is the brutal mass murder of young Kenyans by terrorists at Garissa University College in April. We remember in our prayers the victims and their families. Let the deaths of these young people strengthen our resolve to deal as a united nation, with those who threaten to divide us,” stated President Kenyatta during the Jamhuri Day celebrations in mid-December.

The CS said the government has devised proper measures to help in the fight against terror, lauding the September 2016 rescue of Judy Mutua, a teacher who had been abducted by militants at Shaba-Difu, Somalia.

“There has been much peace and stability in the North Rift region, Security amendment laws and police reforms have enabled realize many goals, this has led to 20% reduction in crime rate,” stated the CS.

The Kenyan security agencies released the names and profiles of the most wanted terrorists and criminals in Kenya.

Among those in the list is notorious Abdifatah Abubakar Abdi aka Musa Muhajir, a Somali citizen who had been earlier deported having been illegally staying in the Coast.

Abdifatah alongside his other associates Abdalla Muumin Abdalla, Suleiman Mohamed Awadh, Abdalla Siraj Marum, Mohamed Ali Ahmed and Hussein Said Omar are wanted for the roles they played in the Mpeketoni attacks.

In November, police arrested two men on suspicion of terror and espionage on behalf of the Iranian State Intelligence.

Some of the spots they were targeting included hotels in Nairobi, frequently used by Western tourists, businessmen and diplomats.

What does the future hold?

“It cannot happen again, no Garissa attack, no Westgate attack and Kenyans should be assured that we are seized of the matter,” said North Eastern Regional Co-ordinator Ambassador Mohamud Saleh during a recent interview.

“We have learnt a lesson and the government highly regrets, there was a bit of negligence here and there, officers have been sacked, now we have a team of very serious officers, it cannot happen again,” he added.

Security agencies say that through the help of Kenyans, many terrorists have been arrested and attempted acts of terror stopped.

“If this insecurity continues, if Somalia is not able to stabilize, because 25 years of instability is too long, then we will have no other way but put a wall on the 800 KM stretch between the Kenya-Somali border, the way the Israelis have done it in Palestine,” said Saleh.

“We have done great achievements, we have a command center that is fully operational,” said Nkaissery. “We can monitor you in the whole town of Nairobi and Mombasa . We know where you are working and we can see you. We can even get to you and know your name. We are very serious; don’t try to do monkey business in the CBD on Nairobi. We want to replicate this in all the big cities.”

This even, as the interior ministry says it has a serious budget constraints, with Nkaissery saying he has a deficit of Ksh 60Billion.

Kenyans have been urged to remain vigilant and take seriously the Nyumba Kumi initiative.

How Kenya tackled the insecurity challenge in 2015 Reviewed by samrack on December 28, 2015 .

2015 is the year Kenya suffered one of the worst terror attacks in recent times. The April 2nd 2015 raid on the Garissa University College alone claimed 148 lives. Also Read: Two police officers killed in Mandera Shabaab ambush But, 2015 is also the year the country made a statement of triumph over terror,