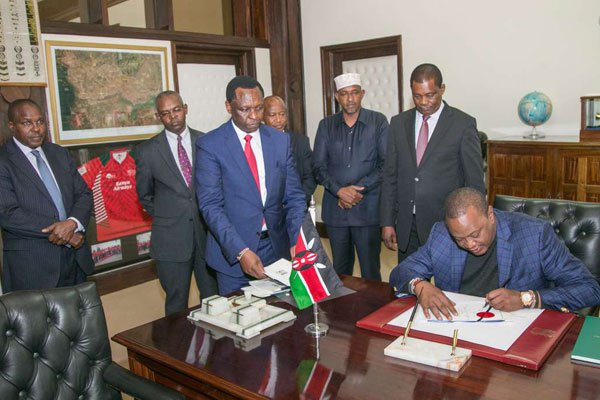 President Uhuru Kenyatta on Wednesday signed into law a bill allowing a 15 per cent tax relief for Kenyans buying houses under the Affordable Housing Scheme.

President Kenyatta has listed affordable housing, universal health coverage, increasing manufacturing share to 15 per cent of the gross domestic product, and enhancing Kenya’s ability to feed itself, as part of the Big Four agenda for his second term.

The tax relief at 15 per cent of gross emoluments will be extended to Kenyans aspiring to buy homes under the scheme, but will not exceed Sh108,000 per year.

“The threshold for real estate development entitlement for the 15 per cent corporate relief has been lowered from 400 units to 100 units, so as to enable cooperatives to benefit from the new measure,” President Kenyatta had said of the plan last month.

Estimates show that out of the 150,000 new housing units required each year in urban areas, only 35,000 were completed.

Cooperative societies, estimated at 23,000, had by 2017, raised Sh1 trillion in savings and had Sh700 billion worth of assets, and will gain from a clause that allows Kenyans to benefit from sacco mortgages.

By end of last year, 800 housing societies had Sh8 billion in savings and had constructed 10,000 houses, a figure expected to increase.

The amendment to the Income Tax Act, signed on Wednesday, also includes the introduction of a compensation tax for power producers under an agreement.

The President also signed into law an amendment to the Stamp Duty Act to exempt first-time home buyers under the scheme from stamp duty.

“The aim of the amendment is to support the manufacturing pillar of the Big Four Agenda by making manufacturing of the items, especially batteries, cheaper,” State House said in a statement.

The move comes barely a day after the Head of State directed the Interior ministry to provide a comprehensive policy framework to address the problem of housing in the National Police Service.

The President gave Interior Cabinet Secretary Fred Matiang’i and Inspector-General of Police Joseph Boinnet 30 days to come up with recommendations to improve efficiency in the police service.

He said the government will continue with the ongoing investments in the police service.